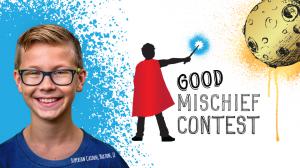 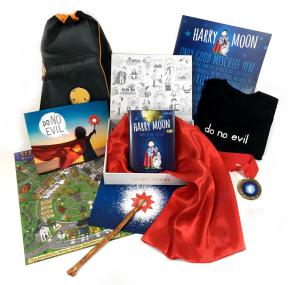 There is nothing more powerful or important than the embracing love of a local community, whether small town or city, in raising a child. Let the Good Mischief begin!”
— Mark Andrew Poe

PAXTON, ILLINOIS, USA, August 31, 2017 /EINPresswire.com/ — Eleven-year-old Harry Moon superfan, Caiden Riecks, announced the first international “Good Mischief Contest” from his home town of Paxton, Illinois. “My mom and dad taught me to be kind to others,” said Caiden. “People should be nicer to each other and get along. Maybe its time for kids to lead the way. Good Mischief as an act of kindness that surprises. Hopefully, people will follow our example and love one another instead of being so angry.”

Last year, Caiden wrote to the acclaimed middle-school series asking about new Harry Moon books. That call began a year-long friendship with Chicago publisher , Rabbit Publishers. Caiden now creatively advises on the series. “Caiden has tremendous heart and character,” said Thom Black of Rabbit Publishers. “He has agreed to lead the country’s one hundred contest winners into an adventure of Good Mischief .”

In a just released YouTube video, Caiden said that one hundred winners will be chosen from submissions from youngsters of their purposed “Good Mischief Feat.” Written submissions will be judged on originality, surprise, and the kindness the act engenders.

The hundred winners will enter round two in late September where they will video and upload their Good Mischief Feat. Worldwide online voting for the best Good Mischief Feat will begin as soon as videos are uploaded.
On Halloween Night in Paxton, Illinois, Caiden, will live-stream the announcement of the top boy and girl vote-getters from the steps of the local Paxton-Buckley-Loda Junior High School.

Champions and parents will be flown to Baltimore, Maryland where they will be given a personal tour of the legendary Geppi Entertainment Museum which celebrates and exhibits memorabilia of the all-time great heroes including Batman and Superman.

Anyone can enter if they are between the ages of eight and twelve years old. Simply go to the Harry Moon website and click on the Good Mischief Contest Page.

“We are thrilled that Caiden and the community of Paxton are helping to launch the Good Mischief Contest,” said Mark Andrew Poe, author of the Harry Moon and Honey Moon series. “There is nothing more powerful or important than the embracing love of a local community, whether small town or city, in raising a child. Let the Good Mischief begin!"