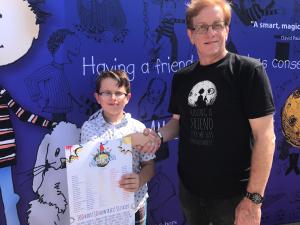 Jazz Anders being congratulated by Mark Andrew Poe as a Finalist 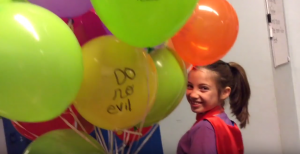 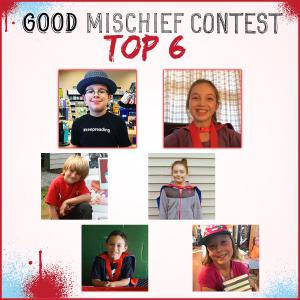 It gives us all hope to see these kids demonstrating kindness in their communities.”
— Mark Andrew Poe, Author of the Harry Moon Books

CHICAGO, ILLINOIS, USA, October 31, 2017 /EINPresswire.com/ — While ten countries participated as finalists , it was an American boy and girl who took first prize in Harry Moon’s International Good Mischief Contest. Lauren Sawyer, 11, from Illinois and Jazz Anders, 10, also from Illinois, were the top vote-getters of the contest.

To qualify for the final round, both finalists produced a one minute video about their “Good Mischief”, an act of kindness that surprises. Both leading vote-getters involved education and reading.

Lauren Sawyer surprised her teachers by delivering thank-you helium balloons to them. Lauren’s video can be seen by clicking here. Jazz Anders hid books in various areas of his town. The lucky finders got to keep the books. Jazz is an avid reader, and reviews books on YouTube. You can watch his winning video here.

Both winners, along with a parent, win a trip to the famous Geppi Entertainment Museum in Baltimore, Maryland. The Runners-ups for both girls and boys will receive the complete library of Honey Moon and Harry Moon books which includes 24 separate titles.

The First Runner-Up for the boys is Andrei Marti, 8, from British Columbia,Canada. Andrei raised money for Juvenile Diabetes by getting a busking license and doing handstands in the streets of Victoria. The Second Runner-Up is James Rabinovitz, 10, of Massachusetts. James volunteered at the Pembroke Firehouse Soup Connection.

On the girls side, the First Runner-Up is Charley Ulrich, 11. She created magical pumpkins and surprised people with that special gift during the Halloween Season. The Second Runner-Up is Charlotte Diehl, 9, from Indiana who made a hand puppet for her younger brother using a Superhero trailer she found on iMovie.

The winners were announced on Halloween Night by Caiden Riecks,11, the Captain of the Good Mischief Team. While trick-or-treaters from around Caiden’s hometown gathered, Caiden used some bails of hay and some pumpkins as a podium, and announced the six winners. Joining him was Carson Lykins, 10, the MC for the Good Mischief Broadcast. The announcement was streamed live on the Harry Moon Facebook page.

“We are thrilled with the response to Good Mischief, “ said Mark Andrew Poe, author of the best-selling Harry Moon and Honey Moon series. “It gives us all hope to see these kids demonstrating kindness in their communities. We can’t wait until next fall’s contest to see what Good Mischief our readers will come up with!.

“Lauren Sawyer and Jazz Anders, this year’s winners, will be next year’s Co-Captains of the Good Mischief Team. To all the kids who played this kindness game, I want to remind you that you are all winners because you were selfless. That’s what being a hero is all about.”

The Harry Moon and Honey Moon books are available at Barnes & Noble, Independent Bookstores and on Amazon. Rabbit Publishers of Chicago, Illinois is the publisher of the Harry Moon franchise.