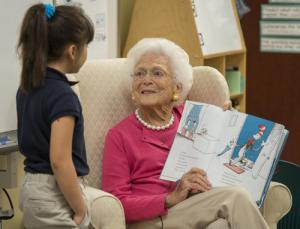 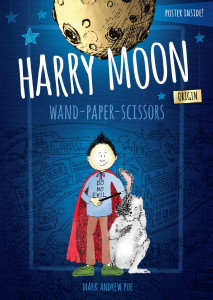 Wand-Paper-Scissors is the First Book in the Initiative

There is nothing more powerful in awakening a child to her or his potential than a wonderful book.”
— First Lady Barbara Bush

HOUSTON, TEXAS, USA, November 29, 2017 /EINPresswire.com/ — The Barbara Bush Houston Literacy Foundation is assembling leaders in education, philanthropy and literature to restore the magic of a good book to the children of Houston. "There is nothing more powerful in awakening a child to her or his potential than a wonderful book," said the former First Lady. “We want to inspire Houston’s children to become America’s future leaders and heroes and reach their fullest potential.”

The Foundation is working alongside Houston’s iconic philanthropist and businessman, Jim ‘Mattress Mack’ McIngvale, and Rabbit Publishers best-selling series, Harry Moon, in giving a book that celebrates goodness to thousands of elementary and middle school children in Houston and its surrounding area.

“I love Houston. To invest in Houston is to invest in its children,” said McIngvale. "I know what happens when a child gets inspired by a great story.”

Houston’s children and schools lost countless books through the devastating floods last month. The Foundations’ My Home Library program wants to make that right. “Many of the children in our Houston schools lost all of their books,” said Foundation President Julie Baker Finck. “Other kids never had a good book to begin with. We want books to become the most prized possession that a child owns.”

“We are so proud to have been chosen to inspire Houston’s children,” said Harry Moon author Mark Andrew Poe. “A child’s life can change in an instant through the power of a good story.”

Using goodness as their weapon of choice, the popular Harry Moon middle school series encourages readers to become heroes in their own communities, accepting the differences of others and cultivating kind behavior. The book design embraces the dyslexic and special needs reader as well.

The Foundation will be giving the gift of reading this Christmas it gives out 1000 hardcover copies of the Harry Moon book, Wand-Paper-Scissors, to school children beginning November 30. The giving of books will continue throughout 2018. The Foundation’s goal is to provide 25,000 Houston children with a home library of six books each through the My Home Library program.

“This sums up everything we would ever hope to accomplish at the Foundation,” said Finck. “Inspired community and business involvement, a great story, and a child reading a wonderful book that encourages them toward a virtuous, heroic life.”

About the Barbara Bush Houston Literacy Foundation
The Barbara Bush Houston Literacy Foundation, co-chaired by Neil and Maria Bush, was established as a charitable organization focused on improving the quality of life for Houston residents through the power of literacy. The Foundation advocates for literacy as a fundamental right of everyone and a foundational skill towards success in life. It is founded on the belief held by Barbara Bush, former First Lady, “If you help a person to read, then their opportunities in life will be endless.” In 2013, the Bush Family created the Houston-based foundation separate from the Barbara Bush Foundation for Family Literacy, a national foundation, in response to the need to deepen the awareness of and intensify services and support for the nation’s fourth largest and most diverse city – Houston. For more information, visit www.bushhoustonliteracy.org or follow us on Facebook at www.facebook.com/bushhoustonliteracy on Twitter @bushhoustonlit and on Instagram @bushhoustonlit.