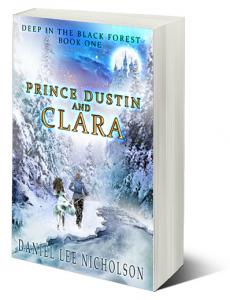 As a complement to the live production, Fossil Mountain Publishing has released a retelling of the ballet, Prince Dustin and Clara: Deep In The Black Forest.

There is no limit to what a person can do that has been inspired by the arts!”
— Fossil Mountain Publishing

DALLAS, TEXAS, UNITED STATES, November 29, 2017 /EINPresswire.com/ — Twas the night before Christmas…and the party begins. From New York to San Francisco; London to Australia, little ballerinas and pint-sized soldiers have given up their e-devices and favorite television shows to attend rehearsals for their town’s local production of The Nutcracker. Although the youngest members of the cast, they have to manage to get their homework done, often-times sprawled out on the floor of the rehearsal studio; continue their ballet classes, typically 3 or more times a week; all while meeting the rigorous Nutcracker rehearsal schedule. However, these young performers wouldn’t have it any other way. Soon they will be on stage wearing a beautiful party dress of satin or perhaps mouse ears and whiskers, dancing alongside the professional cast in a spectacular performance of one of the season’s most popular productions, The Nutcracker.

While rehearsing on stage, only the strong voice of the Production’s Director and the sound of the music can be heard. Everyone else, performers waiting patiently to rehearse and parents anxiously watching, can barely be heard. They softly whisper to avoid gaining the attention of the commanding Director. This is in stark contrast to what is happening backstage. Backstage, there’s a whirlwind of excitement! Production Assistants can be seen scurrying about; costumes must be adjusted, and props must be repaired. The list is endless in what goes on before opening night. The young performers don’t seem to notice the organized chaos all around them. When not doing homework, they can be heard chattering and laughing, as they play card games. And although some reality TV shows may depict otherwise, in reality, many of the young performers often form lasting friendships and close bonds.

As a complement to your holiday festivities and entertainment, Fossil Mountain Publishing is excited to announce the release of PRINCE DUSTIN AND CLARA: DEEP IN THE BLACK FOREST, a re-telling of The Nutcracker. The author, Daniel Lee Nicholson performed in The Nutcracker for 10 years. In his debut novel, he was sure to include the essence of the ballet, including many of the dance scenes. As Clara and the Nutcracker Prince, Prince Dustin, race to escape the wrath of Egon, they encounter one adventure after another Deep in the Black Forest. The Black Forest is the setting of the Snow Scene. Nicholson incorporated much of the allure of the Black Forest in his book. Nicholson’s tale is both fantasy and adventure to appeal to those young and young-at-heart; girls and lads, dancers and non-dancers alike.

PRINCE DUSTIN AND CLARA: DEEP IN THE BLACK FOREST is available through libraries and at most online and retail booksellers.

About Daniel Lee Nicholson:
Daniel Lee Nicholson was born and raised in the Midwest. He has been a performer and ambassador of the performing and fine arts ever since his first performance as a soldier in The Nutcracker in Chicago. He resides with his wife in the Los Angeles area and works in Productions in the Media and Entertainment industry. DEEP IN THE BLACK FOREST, is his debut novel in the series PRINCE DUSTIN AND CLARA.

About Fossil Mountain Publishing:
The mission of Fossil Mountain Publishing LLC is to captivate and entertain; engage and inspire young readers and readers of all ages by publishing family-oriented books that promote reading and literature; technology and the arts. We strive to develop applications and to incorporate technology into our platforms so that our readers can fully immerse themselves in great stories.