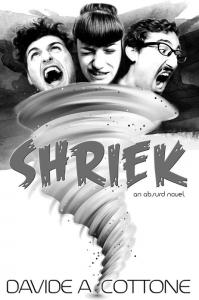 An absurd novel about the government of a mythical country based on absurd political thought and a cryptocurrency economy.

BRISBANE, QUEENSLAND, AUSTRALIA, December 17, 2017 /EINPresswire.com/ — In his political manifesto Shriek: an absurd novel, Australian author Davide A Cottone introduces a cryptocurrency called COIN which becomes the economic standard of his beloved, politically bereft, mythical country of Umbugumbuland. COIN is an acronym for Certificate of Insanity.
‘The Bitcoin phenomenon has become an undeniable economic fact of the 21st century and it is inevitable that it will impact on our political systems soon,’ says Mr Cottone. ‘I want to be among the first to show how it might be done. What was once considered absurd economic thought (Bitcoin) has now become a reality. Maybe it is time for absurd political thought to become our new reality as well.’
In Shriek: an absurd novel, the eccentric protagonist Aleph McNaught is discombobulated by the inept, corrupt and worn out choices of governments mired in ‘swamps of stagnant waters’.
‘Aleph wants to drain those political swamps and replace them with something utilitarian,’ says Mr Cottone, a school teacher of thirty-five years both in Australia and overseas. ‘Maybe our politicians could take a lesson out of his book on absurd political thought and begin making a real difference instead of just talking about it.’
In the tradition of other absurdists like Albee, Beckett, Camus, Kafka, Sartre, Heller, Ionesco and Pinter in literature, and Salvador Dali in art, Mr Cottone’s work challenges the intellect of the reader.
‘It’s not just a case of what you read that matters. It’s what you need to re-read, discuss, and analyse with professors, lawyers, economists, street-loungers and bums that matters,’ says Mr Cottone. ‘Society has become traumatised by a pervading sense of hopelessness; of the meaninglessness of life. There is a clarity in the absurd that offsets the opaqueness of the status quo.’
So that may be what this novel is all about: transcending thoughts that challenge the bastions of rusted, crusted, political and economic thought just painted over repeatedly with assorted colours to make them appear fresh and new.
Mr Cottone has already written an adaptation of the novel as an absurd play in three acts called When the Curlew Comes Calling.
‘In one way or another, I must get my message out there,’ says Mr Cottone. ‘It’s the chatter that matters; on the street and behind closed doors, the chatter is about our worldwide political dilemma. Something needs to be done about it.’
More on Shriek: an absurd novel can be found at www.piebooks.net, and the book can be purchased directly from the website, in book stores or online in print and as an eBook. Any correspondence should be by email: piebooks@yahoo.com. Enquiries about the absurd play are also welcome. ##