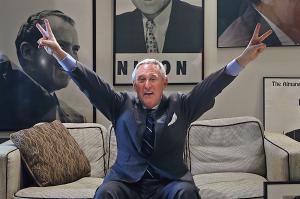 Longtime Trump advisor Roger Stone on Friday beat a defamation case by a political rival who claimed he was falsely portrayed him as a child molester.

"The evidence wasn't strong enough," the forewoman said following the verdict was announced.

Stone ran Manhattan Madam Kristin Davis' campaign in 2010 while Redlich was on the Libertarian line.

Redlich said he was "disappointed" with the verdict but would not appeal.

A veteran of ten national presidential campaigns, he served as a senior campaign aide to three Republican presidents: Nixon, Reagan and, to his regret, Bush. An outspoken libertarian, he is the author of the New York Times bestseller “The Man Who Killed Kennedy: The Case Against LBJ”, the Clinton’s War on Women, The Bush Crime Family, and the Making of the President 2016- How Donald Trump Orchestrated a Revolution. Mr. Stone has written for Fox Opinion, Infowars, Breitbart News, StoneZone, the Daily Caller, and the New York Times.