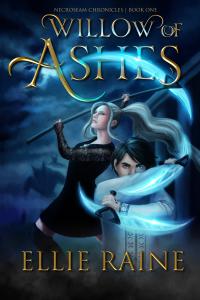 Book I, “Willow of Ashes” 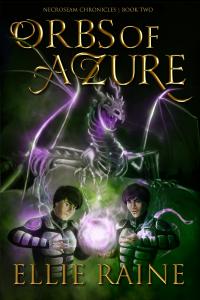 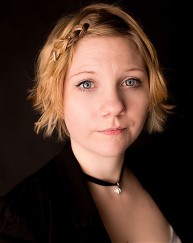 Announcing Ellie Raine's "Orbs of Azure". A Reaper’s soul trapped inside his twin, a Death Princess looking for him, and a dark prophecy yet to be fulfilled.

ATLANTA, GEORGIA , USA, May 18, 2018 /EINPresswire.com/ — ScyntheFy Press announces the publication of their latest book "Orbs of Azure", by Ellie Raine, a fresh new voice in High Fantasy. "Orbs of Azure" is the second book in the NecroSeam Chronicles, a unique epic fantasy series like no other! This original tale is set in an alternate world where reapers are honorable knights who protect both the living and the dead. These scythe-wielding warriors not only escort souls of dead to safety, but they are honor-bound to kill the demons formed from corpses whose souls have been left to rot.

In Book I, “Willow of Ashes”, an apprentice Reaper named Xavier with necromantic powers becomes trapped inside his twin brother after he is flung into the ocean. The coexisting necromancers surface up from their home in the caverns of Grim to the Land Realm above in search of Xavier’s missing body, unexpectedly crossing paths with a sister reaper who was sent to find Xavier by a mysterious Oracle. But this realm is infested with soul-devouring demons, and armed with their crystal scythes, the reapers must survive an army of these nightmarish beasts along with bone-crushing dragons that have been awakened from their slumber.

In Book II, “Orbs of Azure”, the quest for Xavier’s body is put on hold when things escalate into full-out war. For the first time in centuries, knights of the Death Realm are forced to fight against living souls in a double-war with both demons and men. When their comrades are taken captive, the twins join Death Princess Willow on a rescue mission to free them from an impenetrable fortress high in the desert canyons, discovering new powers they never knew they had. Along the way, they encounter unexpected allies of different realms, all searching for the "shadowblood", a legendary hero who looks just like the twins… if they had been born as one.

Both Books of the NecroSeam Chronicles is available in all formats (Ebook, Paperback, Hardcover). You will find them in all bookstores, including Amazon, Barnes & Noble, and Apple.

See the Books2Read Universal Book links below for all Ebook locations:

Ellie Raine grew up in a family of book lovers, comic readers, and video gamers in the suburbs of Atlanta, Georgia where she always dreamed of making the next explosive game series that would catch fire like the Final Fantasy games, except hers would have darker themes that put the spotlight on her favorite fable: the Grim Reaper.

But that plan took a detour after she went to the Art Institute of Atlanta to make that dream happen. In the midst of her drawing classes, she made the mistake of taking a creative writing course from which there was no return. She'd always loved fantasy books much like her family (she had a thing for dragons particularly), but she never thought it would end up becoming her passion. Her ongoing Scythe-and-Sorcery book series, The NecroSeam Chronicles, was originally intended to be that explosive video game series, but she's found that the book adaptation is far more fulfilling and exciting.

In 2016, her first book in the series, Willow of Ashes, was published under Dark Oak Press, but was updated, expanded and republished under her indie imprint in 2018 along with the subsequent books in the on-going series. The third book in the NecroSeam Chronicles, Pearl of Emerald, is due to be released in July 2018. Her other works include a supernatural-noir novella titled Nightingale that was published with Pro Se Productions in 2018.

You can find out more about Ellie Raine and her books at: http://www.NecroSeam.com