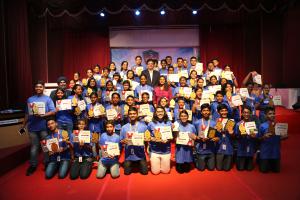 Participants of the Summer Science Camp

BENGALURU, KARNATAKA, INDIA, May 23, 2018 /EINPresswire.com/ — Summer Science Camp for the South Zone was held at Garden City University, Bengaluru from May 16, 2018 to May 21, 2018. This camp is organised for the winners of the National Science Concours competition.

National Science Concours or NSC is a unique online science competition. It is the initiative of Foundation for Innovation and Experiential Learning (FIEL), a not-for-profit education organisation. NSC was conceptualized five years back as a contest with an aim to create value for the participants through experiential learning. NSC has two levels, in the first level, there is an online Science Test and in the second level, students prepare a project based on Science. Winners of NSC go for a five-day Summer Science Camp. FIEL organizes two camps, one in South India and one in North India. This year, the south camp was held at Garden City University, Bangalore from 16th to 21st May, 2018. The North camp will be held at Shoolini University, Solan from June 25th to 30th, 2018. These camps are managed and organised by Mr. Japinder Singh, who heads the NSC program at FIEL.

In five years, the participation has increased from a mere 500 to more than 5 lakhs till last year. As per Mr. Krishan B Chandak, founder of FIEL, the aim of FIEL is to make NSC a value statement for experiential learning for school going children. "NSC is like sowing a seed of structured thinking and innovation in the minds of students. The results can be clearly seen in the students who attend these camps. This year we initiated the concept of "Big Idea of Change". Students have generated very innovative ideas and the best 10 ideas will be nurtured by FIEL to make them a reality."

NSC is recognised and recommended by the Atal Innovation Mission as a valuable contest for school kids.

In this five-day camp, students worked with eminent personalities from the field of Science and learnt from them. NSC is supported by partners like Pacific Rim Robotics. Ms. Rupali Pradhan of Pacific Rim Robotics with her team conducted a one and a half day workshop on Robotics. It was an enlightening experience for the students. Dr. S Sujatha, Scientific Officer at MP Birla Institute of Fundamental Research, took a workshop on Astrophysics. There was a talk by Dr. Nagaraj Lakshmeswar on Medicine as a career. He motivated and answered all the queries of the future doctors of the country. Apart from these, there were activities like star gazing, quizzes, and visits to Indian Institute of Science and Visvesvaraya Industrial & Technological Museum (VITM). On the last evening of the camp, students prepared and presented a vibrant cultural program. The evening was attended by many parents as well.

Neelakshi Chatterjee, Sreshith S R and Tanish Goyal were declared Junior Scientists of the Year in their respective groups.

This Camp was hosted by Garden City University, one of the most enterprising and innovative Universities in India. They have been supporting NSC for the past two years and their mission is to nurture and encourage young talent. GCU offers UG/ PG courses on Technical, Health, Management, Life Sciences, Agriculture, Law and allied sectors.

Dr. Joseph VG, Chancellor of Garden City University had this to say about NSC, "Meeting the National Science Concours Scholars is always a pleasure every year. Drawn from across 30 cities in India, the young and enthusiastic lot in this year's batch I am sure will excel in their corresponding areas of interest. My only advice to them is that they must be a good human being.This team whom I met is an exceptional group and I have full hope they would surpass all expectations. The good work done by NSC team is commendable. Their unconditional love in moulding these children is a treat to the eyes and my best wishes to all."

About Foundation for Innovation and Experiential Learning

Foundation for Innovation and Experiential Learning (FIEL) is a not for profit trust, founded with a mission to promote experiential learning. We want to innovate the way education is being imparted today. Education & learning should be fun with the prime objective of developing overall skills.