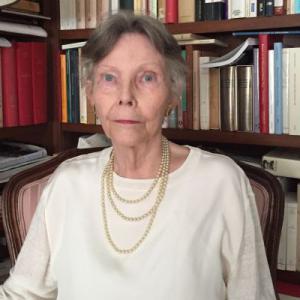 NEW YORK, NEW YORK, UNITED STATES, August 13, 2018 /EINPresswire.com/ — The canon of fine poetry is a dialogue among and between the generations. It takes time to sort itself out. Even great poets may fall out of fashion for a time, but they always find their way back to future scholars interested in the questions they wrestled with hundreds of years ago.

Anne Lake Prescott is the Helen Goodhart Altschul Professor of English emeritus and Senior Scholar at Barnard College, Columbia University. Now 82, Dr. Prescott leaves behind a legacy of scholarship with a commitment to preserving the achievements of the past.

“My own passion as a scholar is for reputation and changes in what one is supposed to think, says Dr. Prescott. “It's fun to see these fashions come and go. John Donne is fashionable now. In 1911, scholars said, "The influence of John Donne upon English literature was wholly pernicious." 200 years ago they thought he wasn't writing regular verse because he was incompetent. We knew better.”

As former president of the John Donne Society, the Edmund Spenser Society and the Sixteenth Century Society, Dr. Prescott holds a deep affection for poetry and the literary tradition.

“I find Donne’s poetry so moving. It's hard to put it into words. If I could, I might be able to write poetry myself,” laughs Dr. Prescott. “What I like particularly is the imagination of his language and meter goes. One of his famous poems begins "Death, be not proud, though some have called thee / Mighty and dreadful, for thou art not so’"

“Donne had a really good ear for the rhythms of English, so when he violates the rules, he knows what he's doing. To capture more of the shifts and curls of the human imagination and love and fear. What made the later 17th century reject him is precisely what made people in the early 20th century accept him.”

CUTV News Radio will feature Anne Lake Prescott in an interview with Doug Llewelyn on August 15th at 11am EDT and with Jim Masters on August 22nd at 11am EDT.