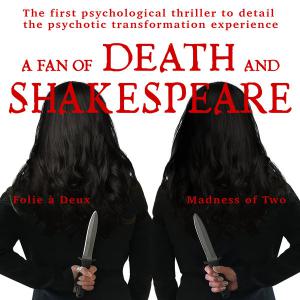 WILLOUGHBY, OHIO, UNITED STATES, August 15, 2018 /EINPresswire.com/ — Reader appetite for the truly unique psychological thriller is greater than ever. Since the releases of "Gone Girl" (June 2012) and "The Girl on the Train" (February 2015), that demand has been left growing and largely unfilled. Written to satisfy the pent-up craving, "A Fan of Death and Shakespeare" promises to be the next extraordinary leap in the evolution of the female-driven psychological thriller.

From the Author:
As a frustrated reader of psychological thrillers and a victim of corporate downsizing, I set out to both expose corporate corruption and explain psychosis. My book takes readers into the dysfunctional mind of the publicly-traded corporation and the bipolar minds of identical twin psychotic sisters. Readers will decide for themselves which is worse, but so far, most are cheering for the psychotic killers and against the corporate directors.

About the Author:
Rick brings lifetimes of knowledge to his fifth novel including eight years working for BP American in its Cleveland, Ohio headquarters building where the novel is primarily set. He holds three degrees, has pursued five careers, has traveled extensively, and has met some incredible characters while accumulating experiences that add color and authenticity to his time-honored writing philosophy: He lives it; He writes it.

About the Book:
Kirkus Reviews compared the novel to those of Steven King and to the work of Thomas Harris' who wrote the Hannibal Lecter series and hinted at a film adaptation by comparing it to David Cronenberg's Dead Ringers. BestThrillers.com called it "One of the decade's most original and surreal psychological thrillers" and went on the say, "Lacey has crafted an impossible-to-put-down murder tale while skewering corporate dysfunction and deftly exploring a rare twin psychopathy."
Inspired by real events and set against the backdrop of a corporate downsizing, "A Fan of Death and Shakespeare" owes its thrills to the exploration of one of the most perfect and mind-blowing forms of psychosis, Folie a Deux from the French meaning Madness of Two. Readers witness identical twin sisters, born with tremendous potential but with a family history of manic-depressive illness, suffer a traumatic emotional event that transforms them from carefree young girls into vengeful psychotic killers. The book delves deeply into the phenomenal workings of their psychotic minds, a place previously available only to psychotics themselves and a select group of dedicated psychiatrists. Although the book reveals every detail as the sisters plan and carry out a killing spree designed to take revenge and cure themselves, readers are shocked by an ending none see coming.

The novel was written with the big screen in mind and features big scenes in locations around the world from northern Ohio to England, the Scottish Highlands, Florida, Cancun, Hawaii, and Australia.

Visit the novel's Facebook Page for interesting posts and updates.

"… the core conceit of criminally inclined, psychologically damaged twins is an absorbing one that will appeal to those who enjoy dark, twisted books by the likes of Stephen King or Thomas Harris, or films such as director David Cronenberg's Dead Ringers." — Kirkus Reviews

Review by BestThrillers.com
A Fan of Death and Shakespeare, a Psychological Thriller by Rick Lacey
The Bottom Line: One of the decade’s most original and surreal psychological thrillers, Lacey has crafted an impossible-to-put-down murder tale while skewering corporate dysfunction and deftly exploring a rare twin psychopathy.
Rick Lacey's new thriller opens in 1994 – the same day as the O.J. Simpson murders – as BP employee John McCall discovers his boss’ body in his office. McCall calls Cleveland homicide detective James Johnson, with whom he is well acquainted – Johnson investigated the murder of McCall's wife and friend two years earlier. With the cold composure of a survivor who has seen more than his share of tragedy, McCall offers a theory for his boss’ death: the beginning of a murderous campaign designed to stop a massive corporate downsizing.

Meanwhile, in London, we're introduced to twin sisters Beatrice Enola Winter and Beatrice Gay Winter at Heathrow Airport, where Beatrice is boarding a Concorde at the behest of BP. As she observes her fellow passengers, it's clear that she has the mind of a predator.

As the ensuing chapters unfold, the relationship between the Winter twins is beyond fascinating.
On one hand, Lacey – who was actually downsized from BP in real life – offers a supremely detailed dive into the co-dependency, sexuality and psychological intimacy of twin culture.

But once you realize what the twins are up to, the relationship becomes the driving force in the investigation at the heart of the book. Characters this well-crafted make for a novel that is impossible to put down. Bravo.