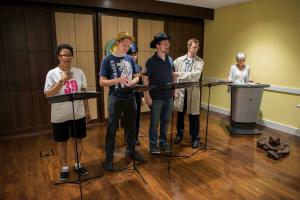 L. Ron Hubbard East Coast Theatre actors perform a final rehearsal of the classic Science Fiction story “The Dangerous Dimension” at the Clearwater Community Volunteers Center in downtown Clearwater. In the audience were the Boy Scouts of Troop 313

CLEARWATER, FLORIDA, USA, August 16, 2018 /EINPresswire.com/ — On Tuesday August 14, the Clearwater Community Volunteers Center, opened and supported by the Church of Scientology Flag Service Organization, hosted the L. Ron Hubbard East Coast Theatre in their final rehearsals of their upcoming presentation of L. Ron Hubbard’s pulp fiction story The Dangerous Dimension. The rehearsal served as an exclusive behind the scenes preview for Boy Scout Troop 313 before the Theater’s live performance on August 18 in the Scientology Information Center, located on the corner of Cleveland Street and Fort Harrison Ave.

This is the first time the Theatre allowed a group to see their rehearsal. The Boy Scouts saw how the theater polishes each final performance using costumes and sound effects.

“These actors practice every week to create a stellar performance that will bring people in the community together,” said Michael Soltero, Manager of the Center. “By opening their rehearsals to the Boy Scouts they accomplish what the Center was established for: bringing different community groups together. They’re doing as humanitarian L. Ron Hubbard wrote, ‘A community that pulls together can make a better society for all.”

The Dangerous Dimension by L. Ron Hubbard is based on Dr. Henry Mudge, who discovers the mathematical formula “Equation C”, which outlines a negative dimension. Using this equation, Dr. Mudge is instantly transported to any location in the solar system by simply thinking of it.

For more information about the Clearwater Community Volunteers Center or to attend an upcoming event, please call Michael Soltero at (727) 316-5309 or email ccvcenter@ccvfl.org.

About the Clearwater Community Volunteers:

The Clearwater Community Volunteers (CCV) have over 25 years of community service under their belt with over 150,000 families and children helped since their founding in 1992. CCV stays true to their reputation of helping others with their new center, located on the corner of Fort Harrison Ave. and Drew St. in downtown Clearwater, which facilitates the growth of non-profits by serving as a free event venue & meeting space. CCV and the CCV Center are sponsored by the Church of Scientology Flag Service Organization.