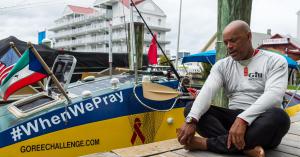 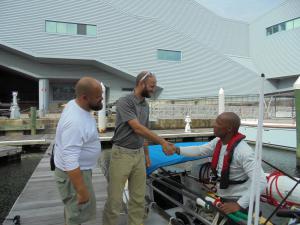 At Nauticus Maritime Museum in Norfolk, Virginia Don Victor Mooney is welcomed, given rest, and updated on local water conditions, 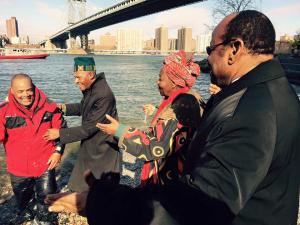 Faces of resilience, commemorative plaques, book, and a resilience tour to Africa will commemorate 400 Years of African American History in the United States.

It's my prayerful hope, that each state in the United States, and it's territories will send a delegation for the Resilience Tour. Our diversity is America's greatest strength.”
— Don Victor Mooney

It's my prayerful hope, that each state in the United States and its territories will send a delegation for the Resilience Tour to Africa. Our diversity is America's greatest strength, said Don Victor Mooney.

With a historic signing, President Donald Trump penned H.R. 1242 bill on January 8, 2018, which established the 400 Years of African American History Commission Act to develop and carry out activities throughout the United States to commemorate the 400 anniversary of the arrival of Africans in the English colonies at Point Comfort, Virginia in 1619. This bipartisan bill was introduced by Congressman Robert C. "Bobby" Scott (VA) and Senators Tim Kaine (VA) and Mark Warner (VA), with numerous co-sponsors and support from advocacy groups.

The African American History Commission Act calls attention to recognize and highlight the resilience and contributions of African Americans since 1619 to the United States. In alignment with the commission mandate, H.R.1242 Resilience Project, Inc. will unveil commemorative plaques along the Inter-coastal Waterway, Virginia Inside Passage, Eastern coastline leading up to New York's Brooklyn Bridge, and other locations upon request. This initiative will recognize the resilience of Don Victor Mooney, (53), from Queens, transatlantic row, that endured ten years, five boats, four attempts, and three rescues at sea, a first for an African American.

The timing H.R. 1242 Resilience Project announcement is two-fold. It also allows me the opportunity to convey prayers and solidarity to the President of Equatorial Guinea, H.E. Obiang Nguema Mbasogo visit to New York this week, as the country began chairing the rotating presidency of the United Nations Security Council on February 1, said Don Victor Mooney. After crossing the Atlantic Ocean, Mooney was decorated by President Obiang on February 3, 2016. He joined his family as they all received nationality and was gifted a home in Oyala.

Mooney's Brazilian built rowboat, Spirit of Malabo, was sponsored by the Republic of Equatorial Guinea, and it would carry him five-thousand miles plus from Las Palmas, Canary Islands, an archipelago located off the coast of West Africa to New York's Brooklyn Bridge. His goal was to bring attention to the global AIDS crisis and honor the countless number of his African ancestors that died during The Middle Passage and worked on plantations in America's as slaves. Mooney is a descendant of slaves that was owned by George Washington, first President of United States.

Mooney's contribution to the United States went beyond the oar. Through his pursuit to cross the Atlantic Ocean, he was pivotal in bridging the gap between Muslim and Arabic countries and the United States; thereby fostering co-existence and tolerance with this population for the global fight against terrorism and the continuity of world peace. Pope John Paul II, now Saint John Paul would give Mooney a blessing at the Vatican on December 1, 2004 – World AIDS Day for his mission.

On December 1, 2019, four-hundred passengers will depart from John F. Kennedy Airport in New York on a chartered flight to take part in a once and a lifetime visit to Africa. This initiative will culminate America's 400 Years of African American History highlighting the arrival of 20 and odd Negroes in Point Comfort, Virginia during 1619. The resilience tour will revisit three departure points for Goree Challenge, which all played a role in transporting Africans to the Americas and Caribbean.

The final itinerary for the resilience tour will be in Equatorial Guinea to celebrate the Spirit of Malabo opening reception for permanent exhibition at The Museum of Modern Art Equatorial Guinea on December 8, 2019. A workshop on workplace/ supplier diversity is being planned at Sofitel Malabo Sipopo Le Golf. In Equatorial Guinea, the islands of Bioko and Annobon were important landing sites for the slave trade. A special forum will also coincide to strengthen cultural, educational, and economic partnerships in the administrative capital city of Oyala, which will promulgate the country's new Single Business Window initiative that will help entrepreneurs with the creation of new companies, through the provision of integrated services for processing and business consultancy.

Guests will be pampered at The Grand Hotel Djibloho, that's located in the heart of the Equatorial Forest and visit The Basilica of the Immaculate Conception in Mongomo, often called the Vatican of Africa by tourist. Ecotourism, golfing and more activities will be available on this trip.

Travelers from outside the United States are strongly encouraged to join in this historic trip.

Mooney rows in Dismal Swamp, which was built by slaves