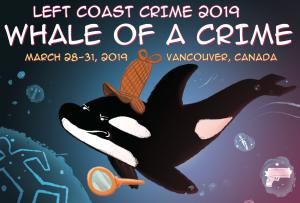 VANCOUVER, BC, CANADA, February 4, 2019 /EINPresswire.com/ — FOR IMMEDIATE RELEASE: Though it might be a mystery to you, British Columbia has a vibrant mystery writing community. As a result, BC authors will be well represented among the attendees at Whale of a Crime, Vancouver’s presentation of Left Coast Crime, a crime fiction conference hosted annually by a different city in Western North America.

Not only is Vancouver itself a big attraction, but this is the first time in the conference’s nearly 30 year history that a Left Coast Crime will be held in Canada. Vancouver is proving to be a big attraction because early registrations are at record highs. Over 80 per cent of attendees are coming from outside of Canada. Of the 700 people expected, about 200 of them will be mystery authors.

Another big attraction will be Maureen Jennings, author of the Murdoch Mysteries, internationally bestselling in book form, but also well loved through the long-running CBC television show.

Jennings will be Guest of Honour at the conference, headlining a distinguished group of authors of crime fiction, including Vancouver’s own Arthur Ellis award winner, and local legend, William Deverell. Attendees can expect to rub shoulders with several other Arthur Ellis winners, including Barbara Fradkin, Rick Mofina and Vancouver’s own Sam Wiebe.

Three local authors have been shortlisted for a Lefty, a prestigious award given annually by Left Coast Crime, the parent organization of the conference. AJ Devlin and JG Toews have both received nominations for Best Debut Novel, and Iona Whishaw has been nominated for Best Historical Mystery.

Left Coast Crime is a much loved conference among mystery writers but especially for their fans, who will be spending quality time with some of their favourite authors while attending panel discussions on many mystery related subjects. There will also be great opportunities to meet them personally at breakfasts, readings, dinners and special author and publisher sponsored lunches and coffees.

Day registrations and full conference packages are available on the web site: leftcoastcrime.org/2019/Registration.html

Ever wanted to write a screenplay? Local award-winning journalist, screenwriter, playwright, and occasional performer, Mark Leihren-Young will be conducting a workshop that focuses on adapting work for the screen. Hollywood North with Mark Leihren-Young takes place on Wednesday the 27th, the day before the conference begins. Prior registration is required.

For information or to sign up for the conference or the writing workshop visit leftcoastcrime.org.