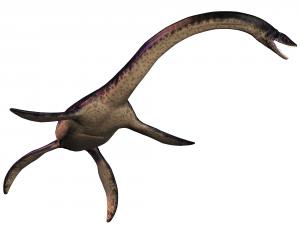 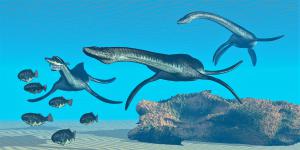 Artist’s depiction of plesiosaurs pursuing a school of fish.

Has the bestselling indie author of the KRONOS RISING series answered the question: Why did plesiosaurs have such long necks?

NEW HOPE, PA, US, February 7, 2019 /EINPresswire.com/ — Max Hawthorne, author of the award-winning Kronos Rising novel series and a passionate fossil collector, believes he has solved a mystery that paleontologists have debated for over a century. “Plesiosaurs, and elasmosaurs in particular, have always stirred the public’s imagination,” Hawthorne said during a recent interview. “They had necks that sometimes stretched over twenty feet, but why? Was there an evolutionary advantage, weren’t they vulnerable to predators, and did this make them slow and clumsy swimmers?”

“There have been many theories put out for these serpentine necks, ranging from the feasible to the ambitious,” Hawthorne pointed out. “They sat on rocks near the water and used their necks like fishing rods, they dug deep into the bottom to search for food . . . one theory even suggested that they had organs in their necks like electric eels, and used them to shock passing fish.”

“I believe we’re dealing with an Occam’s Razor type of situation, meaning the simplest explanation is usually the correct one. It’s a matter of form and function,” Hawthorne said. Known as the “Prince of Paleo-Fiction” for his bestselling series of sci-fi/thrillers, which feature prehistoric marine life roaming free in today’s seas, he added. “We know from their teeth that most plesiosaurs were piscivores – they ate fish. But their small heads, relatively week jaws, and needle-like teeth prevented them from tearing apart large prey. They were limited to feeding on fish the size of their heads or smaller.”

“What most paleontologists haven’t focused on is the plesiosaur’s prey. Fish have a lateral line, a series of sense organs running along their bodies that detects movement and vibrations in the surrounding water. It keeps them from bumping into one another and helps them find prey and avoid predators, even in darkness. As a result, fish can sense the displacement wave caused by approaching objects, including plesiosaurs.”

“Small items, like other fish, would not frighten other members of a school. But a large animal like a shark, approaching from the rear, would set off alarms, causing the school to scatter or take evasive action.” Hawthorne, who does extensive research for his books, concluded, “This is how the elongated necks of plesiosaurs were advantageous. They could follow a school of fish along, keeping pace with them, and ‘graze’ like a meat-eating cow. They would clamp down on one of the slower, weaker fish at the rear of the school, drop back a few feet to gulp it down, and then repeat the scenario over and over.”

“If you think about it, it makes perfect sense,” Hawthorne pointed out. “The largest of long-necked plesiosaurs, like the 40+ foot Elasmosaurus, also had the longest of necks, with 72 vertebrae. Their huge size created the largest displacement waves, and required them to be further away from their prey in order to escape detection.”