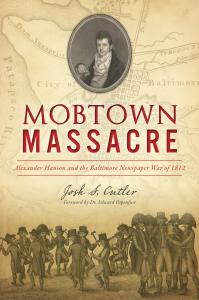 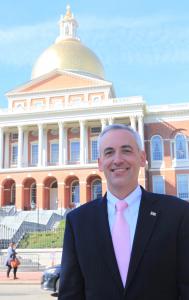 When the press was really under attack: author Josh Cutler tells story of ‘Mobtown Massacre,’ Alexander Hanson and 1812 attack

The event took place at a time when the nation was bitterly divided, plunged into foreign conflict, and polarized by growing partisanship and rising tensions with the press.”
— Josh Cutler

HANSON, MA, USA, February 26, 2019 /EINPresswire.com/ — Massachusetts State Representative Josh Cutler has published a book, Mobtown Massacre, that tells an interesting story of when the press really was under attack, and the story of a fiery young editor for whom the town of Hanson, MA was named.

The event took place in 1812. It was a time when the nation was bitterly divided, plunged into foreign conflict, and polarized by growing partisanship and rising tensions with the press. Then, into the fray, stepped Hanson, the editor, who penned a sharply worded attack on the President and his policies.

In Mobtown Massacre, Cutler shares the story of Alexander Hanson, a 19th century Federalist newspaper editor whose anti-war writings provoked a bloodthirsty mob, a midnight jailbreak and a brutal massacre in the city of Baltimore that stunned the nation. Hanson was later elected to the U.S. Congress, but never fully recovered from the brutal attack on his newspaper.

This fateful but little-known episode in American history helped shape the course of a war and the nation’s promise of a free press. And it all started with a headline.

Josh Cutler, a Duxbury resident, is an attorney, and former newspaper editor who currently serves as a State Representative. He represents a district which includes the Town of Hanson, MA, which is named after Alexander Hanson.

Mobtown Massacre: Alexander Hanson and the Baltimore Newspaper War of 1812 is published by The History Press and includes a foreword by Dr. Edward Papenfuse, a noted historian and retired Maryland State Archivist.

All proceeds from the sale of the book are being donated to local historical societies. For more information on the book, please visit mobtownmassacre.com.