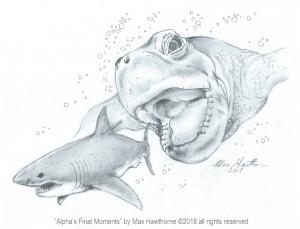 Paleo-Author Max Hawthorne Unveils the Surprising Results of his Research into this Mysterious Creature.

NEW HOPE, PA, US, March 28, 2019 /EINPresswire.com/ — With the recent discovery of a great white shark found bitten in two off the south coast of Australia, it appears Australia’s “Super Predator” may be back. Max Hawthorne, author of the award-winning Kronos Rising series of paleo-fiction novels and a world-record-holding angler, has a controversial theory about what may be preying on the region’s apex predators.

“The ‘Super Predator’ first came on the scene over a decade ago,” Hawthorne said. “Researchers got a tracking tag back from a 3-meter white shark they’d dubbed ‘Alpha’. According to the tag, Alpha had been swimming near the surface, then unexpectedly dove at high speed to nearly 2,000 feet and stopped. The tag’s temperature suddenly jumped from 46 degrees Fahrenheit to 78 degrees and stayed there for the next 8 days, after which it washed ashore. This, coupled with it showing signs of being etched by stomach acid, indicated something had consumed the shark.”

Hawthorne explained that there have been a lot of theories aimed at identifying Alpha’s killer, but none of them seem to pass muster. “I first did a writeup about the Super Predator back in 2015, after the initial documentary came out. As soon as I studied all the variables, I felt something was off. None of the usual suspects (sperm whale, Orca, giant squid, a larger great white) were a match, even from a matter of body temperature. Whatever consumed Alpha was too cold to be a whale, which have temps similar to those of human beings. A squid’s temperature is like that of the surrounding water, so it was also out. That left researchers with one obvious possibility – a larger shark.”

“However, I’m not convinced,” Hawthorne intimated. “If you look at the stats from the elasmobranchologists, the core (stomach) temperature of a great white is the warmest part of its body and fluctuates, ranging from 13-25 degrees above that of the surrounding water. Whatever ate Alpha had an internal temperature 32 degrees higher and maintained it for the next 8 days, at which point the tag was excreted. Also, per the tag, during those 8 days it stayed near the surface, acting in a manner similar to an air-breathing killer whale.”

When asked what the Super Predator might be, Hawthorne replied, “The only animal that seems to fit, temp-wise, is the leatherback turtle, which can sustain a body temperature up to 32 degrees higher than that of the surrounding water. Interestingly, this is the exact temperature differential of Alpha’s killer. Leatherbacks also have a very long digestive system, six times longer than other sea turtles, which could account for the 8 days it took to digest the shark and excrete its tag.”

However, Hawthorne went on to say that the Super Predator is definitely not a leatherback. “They’re too small and they feed on jellyfish. But the data did lead me to consider the possibility that a large marine reptile of some kind might be the culprit. I started looking into it. Although hard evidence, like the Super Predator itself, is hard to come by, there was a sighting back in 1969 that did pique my curiosity. An angler named Garry Liimatta saw and filmed a huge marine animal off Vancouver Island. He described it as a 38-foot shell-less sea turtle capable of ‘terrific speed'.”

When asked if the Liimatta footage was compelling, Hawthorne said, “At first, the old Super-8 film didn’t seem to show much – a dark object suspended at the surface. I thought it was a fin or something. But when I took a few frames and lightened and enhanced them, I found myself staring at the face of some sort of long-necked turtle, poking up from the waves. It was startling.”

Hawthorne concluded, “I know it sounds outrageous; we’re so used to thinking of turtles as being these lovable characters from a children’s film. But if you consider all the evidence, it starts to make sense. There have been numerous sightings of giant sea turtles over the years. A fish-eating turtle larger than a killer whale could certainly view a 3-meter shark as prey and, based on normal-size leatherbacks being capable of 22 mph, be fast enough to catch it too. Size-wise, it even matches the anomalous sonar reading the Super Predator researchers got a few years back. They described it as measuring 10.5 meters (around 35 feet) and swimming slowly, deep down. Say what you will, but that sounds like a big turtle to me.”