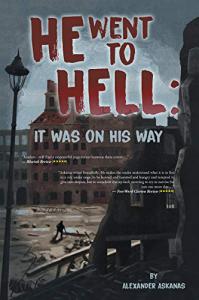 He Went to Hell: It Was on His Way

He Went to Hell: It Was on His Way by Alexander Askanas

NEW YORK, UNITED STATES OF AMERICA, April 5, 2019 /EINPresswire.com/ — History tells facts but David’s story will tell how it feels to live through one of the greatest Jewish uprisings, the Warsaw Ghetto.

A fictional narrative that follows David Apfelbaum through the Warsaw Ghetto, Askanas captivates a thrilling and empathetic perspective on the war. David escapes the Warsaw Ghetto after the failure of the first uprising against the Nazis. He later joins the Home Army, the Polish resistance group, and fights in the second Warsaw uprising. His narrative personalizes history, allowing the reader to gain a deeper understanding of the complexity of war. He joins the “Aryan” side to survive, despite much tension between the Jews and Poles. But, does that deem David’s decision as acceptable when his brother Stefan does something in a similar vein? He joins the Jewish police, known for cooperating with the Nazis who deport Jews to concentration camps and eventually betrays David. The meaning of loyalty and trust are tainted by betrayal and doubt. The means of survival comes at a heavy cost, too, even if that spells out hell for David.

The author Alexander Askanas would know what hell David went through since he lived through the Warsaw Ghetto himself. He knows how to craft realistic stories about the war because of his upbringing. His first historical fiction novel Black Swastika, Red Swastika published in 2009 was inspired by his personal experience on the war. He currently resides in Manhattan, New York as a practicing cardiologist.

About the Author:
The author is a practicing Manhattan Cardiologist. This is his second novel of historical fiction. It deals with two uprising in WWII Warsaw, one Jewish and the other Polish. Author's early childhood was spent in the Warsaw Ghetto and the memory of these times inspired his first novel: "Black Swastika, Red Swastika", published in 2009.