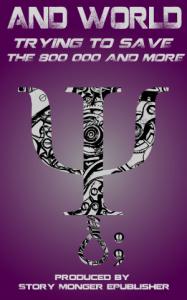 From a politically corrupt and strife-ridden developing country calls a single voice, attempting to help in the same way they were helped, through storytelling.

I'm amazed that I wasn't part of the statistics. According to the World Health Organization, 800,000 people commit suicide every year, meaning more think about it and attempt it. ”
— Story Monger

TORONTO, ON, CANADA, May 27, 2019 /EINPresswire.com/ — Fresh and first-time novelist ‘Story Monger’ is proud to announce the release of the first book in the series, And World: Trying to Save the 800,000 and More.
The book is a fictional wish fulfillment story inspired by the Westworld franchise. Patients diagnosed with personality disorders go to And World, a theme park inhabited with androids, to try and resolve the core issues that caused them to have a mental health crisis.

The new release is already creating waves around the world and is well on its way to success. It was written by author ‘Story Monger,’ unwilling to use his or her real name because they'd rather the story gain more acclaim than him or herself.

“I am incredibly wary of attention,” Story Monger says. “I’m writing under my pen name because this is all supposed to be about paying it forward and creating something that can help people the way stories helped me.”

Having grown up in an environment where “abuse and terrible things were the norm,” the author has suffered from mental health issues and the stories are reflective of those life experiences.

“I'm amazed that I wasn't part of the statistics,” the author explains. “According to the World Health Organization, 800,000 people commit suicide every year, meaning more think about it and attempt it. I'm grateful to my support systems that I actively sought out and the books that helped escape my reality for a time, hence, this whole paying it forward thing that my mentor inspired in me.”

They are working with Dove and Dragon Publishers and their network of bloggers to get the novel out to over 50 000 readers, and certain established bestselling authors and entertainers are in talks with Story Monger about how they want to promote it to their fans, who also number in the millions.

The following is an extract from the first scene:

“I followed his voice to the living room. “What’s your problem?! You can’t do this!”

I found his father, Bob, my step-dad, standing over him; Max was sprawled on the floor—bloody.”

And World: Trying to Save the 800,000 and More can be downloaded for free on Smashwords at https://www.smashwords.com/books/view/938776.