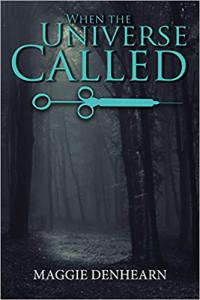 When the Universe Called by Maggie Denhearn

The possibilities of the universe are infinite when we tap into our innate inner guidance system and harness the power of the Law of Attraction.”
— Maggie Denhearn

BOWSER, BC, UNITED STATES, May 28, 2019 /EINPresswire.com/ — Ever wondered about bizarre coincidences and the times when truth seems stranger than fiction? Author Maggie Denhearn invites readers to reconsider those 'accidents of fate' and the power humans have to actively create one’s own world.

An enthralling metaphysical adventure romance novel, “When the Universe Called” follows the story of five ordinary women who answered the call of the universe and used their own powers to stop corporate corruption. The inner worlds of the characters are juxtaposed against the material world of corruption and political intrigue and beyond, to the limitless possibilities of the universe. Guided by Brina, the peculiar local coffee shop owner, who has the ability to read people’s thoughts, five Vancouver Island women learn just what can be achieved when you trust your inner self enough to use the power of thought and the love of the universe.

“The possibilities of the universe are infinite when we tap into our innate inner guidance system and harness the power of the Law of Attraction. When the Universe Called is a fictional depiction of this concept – a concept that is often only found in nonfictional works,” says Denhearn.

“The book truly combines all of my passions into one compelling novel. People will be inspired to take reality into their own hands and harness the power that exists within” Denhearn adds.

Denhearn’s debut book, “When the Universe Called,” will be featured in this year’s BookExpo America and BookCon, the two largest annual book trade fairs in the United States. The events will be held on May 29 – June 1 and to June 1 – 2 respectively at Javits Center in New York, NY.

About the Author
Originally from England, Maggie spent several years traveling and living around the world before finally landing on beautiful Vancouver Island. Inspired by a view of the Pacific Ocean on one side and mountain ranges on the other, she finally took the plunge and embarked on her dream to become a fiction writer. When she is not busy writing, she spends her time running the incredible trails with her friends and her little white dog.

Book copies are available at Amazon, Barnes & Noble, and other online book retailers.