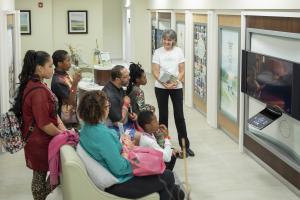 Visitors to The Way to Happiness Center during the Downtown Block Party learn about morals and common sense.

Real heroes are the quietest-talking fellows you ever met and they are very polite to their friends.”
— L. Ron Hubbard

CLEARWATER, FLORIDA, US, May 30, 2019 /EINPresswire.com/ — On Saturday July 13th, between 5:00 – 10:00pm, The Way to Happiness (TWTH) Association Tampa Bay will participate in the quarterly Clearwater Downtown Block Party and invites visitors to tour their center where hundreds of families and members of non-profit organizations have held events and learned the precepts in The Way to Happiness.

“The values parents and grandparents taught in generations past are getting lost in this age of the Internet and social media,” said the Executive Director of The Way to Happiness, Tanja Cranton. “Treating each other with respect is a mark of every civilized society and needs to be taught to our youth to develop self-esteem and improve our communities.”

TWTH Association is concerned with the increase in bullying, another sign that respect is not being taught. Bullying statistics on www.stopbullying.gov reveal that 28% of U.S. students in grades 6–12 experienced bullying and approximately 30% of young people admit to bullying others in surveys. 70.6% of young people say they have seen bullying in their schools.

L. Ron Hubbard wrote in The Way to Happiness booklet, “In the unreal world of fiction and the motion pictures, one sees polite villains with unbelievably efficient gangs and lone heroes who are outright boors. Life really isn’t like that: real villains are usually pretty crude people and their henchmen cruder; Napoleon and Hitler were betrayed right and left by their own people. Real heroes are the quietest-talking fellows you ever met and they are very polite to their friends.

“When one is lucky enough to get to meet and talk to the men and women who are at the top of their professions, one is struck by an observation often made that they are just about the nicest people you ever met. That is one of the reasons they are at the top: they try, most of them, to treat others well. And those around them respond and tend to treat them well and even forgive their few shortcomings.”

TWTH Association Tampa Bay is making it a vital mission to educate youth and families on The Way to Happiness moral code. On July 13th all visitors will receive their personal tour through The Way to Happiness center and receive complimentary book, DVD’s and information kits.

The Way to Happiness Association Tampa Bay is sponsored by the Church of Scientology. Since the opening of the center in July 2015, over 475,000 The Way to Happiness books have been supplied, at no charge, to mentors, educators and parents in schools and after-school programs.

To find out more about the program or how to obtain materials for your community, please contact The Way to Happiness Community Center on 33 N. Fort Harrison Ave, Clearwater FL 33755 opens its doors daily from 10am – 10pm or call: (727) 467 6961.