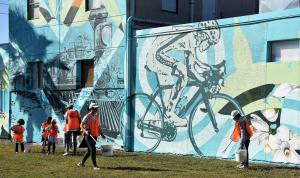 We are dedicated to raising the community’s awareness of the harm that litter causes our environment while at the same time leading by example”
— Tanja Cranton, ED of TWTH Association of Tampa Bay

CLEARWATER, FLORIDA, US, May 30, 2019 /EINPresswire.com/ — On Saturday June 22nd, The Way to Happiness (TWTH) Association of Tampa Bay will continue its campaign of cleaning up the environment at their adopted mile of the Pinellas Trail.

“We are dedicated to raising the community’s awareness of the harm that litter causes our environment while at the same time leading by example,” said the Executive Director of The Way to Happiness Association Tampa Bay, Tanja Cranton. “With the recent addition of this beautiful mural along the Pinellas trail, we want to ensure this area is kept pristine for all to enjoy.”

So far this year, TWTH volunteers have done two cleanups on the trail and a total of 20 cleanups throughout various neighborhoods in Clearwater.

Littering is a punishable offense in Florida. Littering from a motor vehicle could add three penalty points on the violator’s driving record. Littering a neighborhood can cause a fine of up to $100 or jail time if litter weighing 15 – 500 pounds is dumped in an area. If litter is more than 500 pounds, it becomes a felony offense with a possible 5-year jail sentence.[1]

TWTH Association Tampa Bay bases its actions on the book by L. Ron Hubbard in which he wrote, “Care of the planet begins in one’s own front yard. It extends through the area one travels to get to school or work. It covers such places as where one picnics or one goes on vacation. The litter which messes up the terrain and water supply, the dead brush which invites fire, these are things one need not contribute to and which, in otherwise idle moments, one can do something about.”

TWTH Association Tampa Bay is one of nine humanitarian organizations in Clearwater that is sponsored by the Church of Scientology Flag Service Organization. The Way to Happiness book which is the first moral code based wholly on common sense. Written by L. Ron Hubbard and originally published in 1981, its purpose is to help arrest the moral decline in society and restore integrity and trust to humankind. The Way to Happiness further holds a Guinness Record as the world’s single most translated non-religious book in the world. This code of conduct can be followed by anyone, of any race, color or creed and works to restore the bonds that unite humankind. The Way to Happiness Association Tampa Bay holds weekly activities at its headquarters in downtown Clearwater to educate communities on common sense principles.