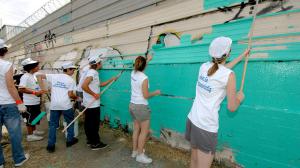 Thousands of youth have participated in The Way to Happiness Set a Good Example Contest, thereby inspiring millions of other youth through their street cleanups and graffiti paint-outs and other activities.

Children like Drew exemplify good behavior and care towards others.”
— Tanja Cranton, ED of TWTH Association of Tampa Bay

CLEARWATER, FLORIDA, US, June 27, 2019 /EINPresswire.com/ — This week, the Way to Happiness Association of Tampa Bay announced, “The Perfect Example” of an eighth-grader by the name of Drew, who chose to support a children’s nonprofit for his assigned community service. Drew made and sold chocolates to raise funds for the nonprofit after his teacher gave them a project to do something good for a group or organization.

“Children like Drew exemplify good behavior and care towards others,” said the Tanja Cranton, the Executive Director of The Way to Happiness Association Tampa Bay. Cranton further explained that lack of self-discipline and moral values among youth can turn into unwanted behavior and even criminality. The Way to Happiness helps young people to develop a common sense moral compass through projects such as the “Set a Good Example Contest”.

The Way to Happiness Foundation in Glendale California runs many Youth Poster and Youth Essay Contests with its largest being the Set a Good Example Contest. The contest has reached into more than 12,000 schools, contacting 12 million students. Their national Set a Good Example Contest has been recognized sixteen times in the US Congressional Record.

Projects for the contest can be anything that forwards the common sense moral values found in The Way to Happiness book. Some entrants have carried out cleanup campaigns. Others have organized and distributed copies of The Way to Happiness in their communities. Their actions promote honesty, tolerance, hard work, competence, respecting the religious beliefs of others, taking care of the environment, or being industrious.

To contact the foundation and find out more about the contest go to https://www.thewaytohappiness.org/contact.html

The Way to Happiness Association Tampa Bay is sponsored by the Church of Scientology Flag Service Organization as one of its many humanitarian outreach programs. With over 475,236 booklets supplied, at no charge since the opening of the center in July, 2015. Parents, mentors educators welcome the materials as a solution to bring about respect and mutual understanding amongst youth, in the classrooms and communities.

Inquires about the program or how to attain materials for your community please contact The Way to Happiness Community Center on 33 N. Fort Harrison Ave, Clearwater FL 33755 opens its doors daily from 10am – 10pm or call: (727) 467 6961.

The Way to Happiness: