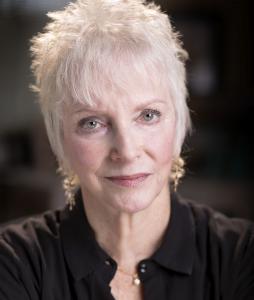 Pattie Palmer-Baker is an acclaimed visual artist and writer who lives in the Portland, Oregon area.. 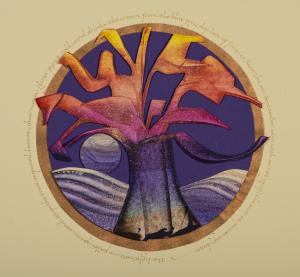 Writer Pattie Palmer-Baker offers her unusual visual art and calligraphy for sale from her website, pattiepalmerbaker.com.

Pattie was the unanimous choice for our award.”
— Executive Director Larry Upshaw

Announcement of the Bivona Prize, named in memory of novelist and poet Ginnie Siena Bivona, was made this week from Ageless Authors headquarters in Dallas.

“Pattie was the unanimous choice for our second annual award,” says Larry Upshaw, Executive Director of Ageless Authors, the international group dedicated to encouraging and promoting senior writers. “She completely dominated our poetry category like no one before.”

Also nominated for the prize were Geoffrey Graves of Laguna Beach, California and Neil McKinnon of Burnaby, BC, Canada. Nominations are based on the quality and depth of submissions to the Ageless Authors annual international writing contest just concluded.

There were five categories of writing — memoir, humor, adventure, romance and poetry. Graves’ writing was honored in each category except poetry, which he did not enter. McKinnon had two exceptional short stories honored in the humor category.

Poetry judges were simply blown away by Pattie Palmer-Baker’s work. Ann Howells, who led the poetry judging team, is an often-published poet with a national reputation and extensive experience judging the poetry of others. In her comments about the two winning poems by Palmer-Baker — Gangsters of the Portland Sky and The Moon and I Are Drunk — she said those were not only the best poems she had read in the contest, but the best she had read in a long time.

“Pattie Palmer-Baker is a wordsmith whose rich, image-filled poems present our world with penetrating perception,” says Howells. “Totally free of cliche, her writing probes beyond casual observation and opens us to interconnections not readily apparent. Perhaps that is the true strength of her poetry; she creates a sense of magic in the quotidian. She truly did gain another fan the first time I read her work — a very talented lady.”

Palmer-Baker has a BA in literature from University of Southern California and an MA in education from Stanford, and taught high school English for six years. For 25 years she worked as a school counselor in elementary and middle schools. She credits her life in Portland, which she shares with her beloved husband and Lily, her rescued longhaired dachshund, for fostering her long-time love of art.

“Portland is one of those rare cities that welcomes artists and writers,” she says. “You see artwork exhibited not only in galleries but also in restaurants, bars, church annexes, nearby festivals. And you hear poetry read in libraries, independent bookstores, coffee shops and even in pubs.”

She has been nominated for the prestigious Pushcart Poetry Prize and her work has appeared in Calyx, Voicecatcher, Military Experience the Arts, Minerva Rising and Phantom Drift. Recently she published Mall, her first novel and the 2017 winner of the Del Sol Prize for first fiction.

Palmer-Baker is also a visual artist who likes to combine poetry in calligraphic form with images to make a statement. Her art can be found on her website. Below is her winning entry, Gangsters of the Portland Sky.

Everywhere they black-litter lawns,
stutter-hop on buckled sidewalks,
cake-walk down Willamette Boulevard,
and flutter-kick away from speeding cars’
smash and gash at the minute’s last flicker.
They recognize faces, post sentries
in bare-branched trees, screech coded warnings –
beware of us, the gangsters of the Portland sky!
We dive bomb red-tail hawks mid thermal swirl
and catcall their retreating swoop.
I have often wondered
whether it is better to know
a little about a lot or a lot about a little.
I could google crows, learn more about them –
every day observe their black bird actions
and stop studying my own behavior,
stop trying to understand why blood pumps
red outside my body but looks blue in my veins
and why the beats of my heart slow
to an almost stillness when I think
of my father who lies in his grave but is not dead.
I do know something that is not a poem
instead a naked fact.
Once I saw lying in a street island’s center
a dead crow encircled by a small cadre of crows
and on some arcane signal they all bowed.