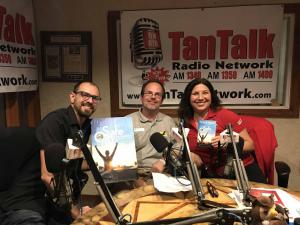 We at The Way to Happiness feel that the issue of littering is not new but needs to be addressed with urgency. A litter-laden community reduces community pride and is a major contributor to crime.”
— Tanja Cranton, ED of TWTH Association of Tampa Bay

CLEARWATER, FLORIDA, US, July 11, 2019 /EINPresswire.com/ — Popular resident and host of the local radio show “Talk of the Town” on WTAN 1340AM and 106.1FM, Lynn Posyton, told her audiences about The Way to Happiness Association Tampa Bay (TWTH) in her July 9th show. Lynn covered TWTH Association spearheaded a “Safe City, Safe Neighborhood” team with the purpose of improving the cleanliness and safety of the local area. To accomplish this, TWTH Association volunteers carry out several community cleanups a week.

Lynn said that TWTH volunteers base their actions on The Way to Happiness book, authored by L Ron Hubbard in 1981. The book contains 21 common sense principles for a better living includes a section, “Help take care of the planet” in which Hubbard wrote, “ The idea that one has a share in the planet and that one can and should help care for it may seem very large and, to some, quite beyond reality. But today what happens on the other side of the world, even so far away, can effect what happens in your own home.”

The Way to Happiness is one of nine humanitarian outreach programs sponsored by the Church of Scientology and is holding the next community cleanup this Saturday May 4th at 10AM.

The Way to Happiness is the first moral code based wholly on common sense, originally published in 1981, its purpose is to help arrest the current moral decline in society and restore integrity and trust to humankind. The Way to Happiness further holds a Guinness Record as the world’s single most translated non-religious book in the world. This code of conduct can be followed by anyone, of any race, color or creed and works to restore the bonds that unite humankind.