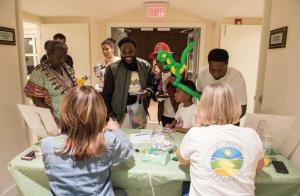 A couple of the hundreds of families in The Way to Happiness Center in Downtown Clearwater to celebrate the Center’s 4th Anniversary on the 13th of July.

Basic moral values are important in life; they form the building block of communities and unite citizens, no matter their ethnic background, color, or creed.”
— Tanja Cranton, ED of TWTH Association of Tampa Bay

CLEARWATER, FLORIDA, US, July 18, 2019 /EINPresswire.com/ — On July 13th, The Way to Happiness Association (TWTH) Tampa Bay opened its doors during the quarterly Clearwater Downtown Block Party and invited visitors to tour the center and celebrate its 4-year Anniversary of working to reverse trends that plague local communities. Since its opening in July 2015, TWTH center in downtown Clearwater has gotten over 1,300 volunteers to distribute over 475,000 copies of The Way to Happiness booklet to schools, after-school programs, mentors, educators and parents throughout the area. The booklet is a non-religious moral guide to better living. Over 780 individuals and groups have partnered with the association to help the community.

“Basic moral values are important in life; they form the building block of communities and unite citizens, no matter their ethnic background, color, or creed,” said Tanja Cranton, the Executive Director of TWTH Association Tampa Bay. TWTH Association pointed to the increase in bullying as a sign that respect needs to be taught to children. Bullying statistics on www.stopbullying.gov reveal that 28% of U.S. students in grades 6–12 experienced bullying and 70.6% of young people say they have seen bullying in their schools. Also a 2013-2017 Community Survey found that the overall divorce rate in Florida is 12.9% compared to the US national divorce rate of 10.9%. In Tampa Bay, almost 300,000 people went through a divorce last year.

The Way to Happiness facilities at 33 N. Fort Harrison Avenue in Clearwater include volunteer offices, informational displays to introduce visitors to every element of the campaign, and a seminar room where groups and concerned individuals can train to deliver the curriculum.

TWTH Association Tampa Bay is sponsored by the Church of Scientology as one of its many humanitarian outreach programs. For inquiries about the program or how to obtain materials, please visit The Way to Happiness Community Center on 33 N. Fort Harrison Ave, Clearwater FL 33755 or call: (727) 467 6961. The center is open daily from 10:00 am to 10:00 pm.

The mission of The Way to Happiness Association Tampa Bay is to reverse the moral decay in the area by restoring trust and honesty through the publication and widespread distribution of The Way to Happiness, a common sense guide to better living. That mission is accomplished on a grass-roots level, by individuals who share The Way to Happiness book with others and so bring about an increase in tolerance and understanding between families, friends, groups, communities, nations and Mankind—making a safer, less violent world for all. The Way to Happiness book was written and published by L. Ron Hubbard in 1981 as a nonreligious, common-sense guide to better living. It is available in 115 languages, with some 115 million copies distributed in 186 nations. The campaign to distribute the book has been embraced by more than 257,000 groups and individuals and millions around the world have received the materials free of charge thanks to the continued sponsorship of the Church of Scientology.