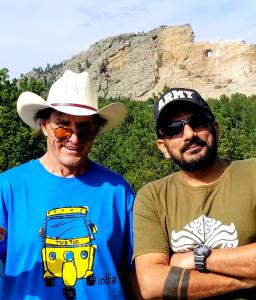 SACRAMENTO, CA, UNITED STATES, August 29, 2019 /EINPresswire.com/ — Dan “Tito” Davis is the award-winning bestselling author of the book "Gringo: My Life on the Edge as an International Fugitive" has had interest in the movie rights to his book and life by Rumann Kidwai, an experienced filmmaker and producer based in Mumbai, India. Davis and Kidwai have had multiple meetings both in India and the US, discussing Davis’s life on the run, and his eventual capture.

When asked about his interest in Davis and his years on the run, Kidwai provided the following statement:

“Dan “Tito” Davis is the ultimate survivor. Having been an international fugitive for over 13 years, and across more than 54 countries, Tito had evaded the tough, three lettered trio of the F.B.I., C.I.A., and the D.E.A., and then, for good measure, the U.S. Marshals, Homeland Security, U.S. Customs, Interpol, local law enforcement agencies, immigration agents, mercenaries, guerilla organizations, professional kidnappers, career hitmen, vigilantes, human traffickers, and most other entities worth being wanted by.”

“Through the various chapters of his life, Tito dealt with the Bandidos Motorcycle Club, invented the “Red Bull” of the day, lived, laughed and loved with the Medellin cartel, negotiated the deadly Darien Gap, weathered three weddings, had plastic surgery to alter his appearance, owned a resort in Venezuela, attended school with third graders, looked down a few gun barrels, piloted jet airliners, won a national kite surfing championship, racked up a few million dollars, made some enemies and a heck of a lot of friends.”

“A casual observer would note that these feats are a touch beyond the ordinary.”

“I met Tito during slightly less tumultuous times – right after he met with the Dalai Lama (!) in the serene foothills of the Himalayas in India. A common friend, and pizza making pioneer, called Morgan Murugan had put us in touch, and after a brief conversation on the phone, Tito was on an aircraft and on his way to Mumbai, India, where we spent a few days at my apartment chatting and getting to know each other. It is then that I expressed my intention to do what I could in enabling his epic adventure to be translated to screen.”

“I had read up a bit about Tito, and caught some press regarding his exploits, and the recently released memoir of his days on the run titled, “Gringo – My life on the edge as an international fugitive”, which had already topped a few bestseller lists. Suffice it to say, that I found his story captivating – if you pardon the pun. What I found especially charming, was the elegant candour of the narrative. That such an epic could be stated in such a matter-of-fact manner – where the story truly spoke for itself.”

“We stayed in touch and met again in the hippie haven of Goa, India, where Tito pit-stopped during his record creating book signing tour to all seven continents. By now his book had sold tens of thousands of copies and Tito’s press coverage had snowballed into an avalanche. The fact that his story was screaming out loud to be told on screen was a foregone conclusion. “

“From its clutter-breaking novelty, to its plot elements and situations, to the fabric of its protagonist, to its cast of characters, its landscapes and locations, the myriad twists and turns, the human element at its core and the unconventional unfolding of its narrative, Tito’s account has all the makings of the quintessential blockbuster, and checks all the boxes. The fact that it is also spilling over with sex, drugs, hitmen, gangsters and beautiful women does its prospects no harm. And herein lies my confidence in its cinematic destiny.”

Dan “Tito” Davis comes from a town in South Dakota so small that everyone knows their neighbor’s cat’s name. But once he got out, he made some noise. While at UNLV, he started manufacturing White Crosses, aka speed, and soon had the Bandidos motorcycle club distributing ten million pills a week. After serving a five year prison sentence, he got into the weed game, but soon after was set up on a phony charge by his childhood friend. Facing thirty years, Davis slipped into Mexico, not knowing a word of Spanish. He became Tito and began a thirteen-year odyssey that led him to an underground hideout for the Medellín Cartel in Colombia; through the jungles of the Darien Gap, the world’s most dangerous passageway; being interrogated in Cuba, and much more. Davis is discussing the rights to his story with multiple studios, agents, and actors while he finds the best outlet for it. He can be reached at dantitodavis@gmail.com and gringobook.com.