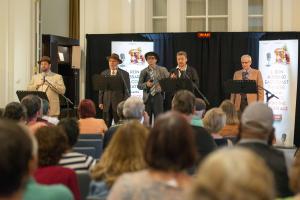 The L. Ron Hubbard East Coast Theatre cast performing the Sci-fi adventure story, The Professor Was a Thief on August 24th at the Scientology Information Center. The Center is located in Downtown Clearwater and is open to the public daily 10am-10pm.

A culture is only as great as its dreams, and its dreams are dreamed by artists.”
— L. Ron Hubbard

CLEARWATER, FLORIDA, US, August 29, 2019 /EINPresswire.com/ — On Saturday, August 24th the L. Ron Hubbard East Coast Theatre performed, a Big Apple story, The Professor Was a Thief, in downtown Clearwater. The ‘standing-room-only’ audience enjoyed the radio-style reading in the historic Scientology Information Center. The story highlights the hustle and bustle of a news room as New York landmarks disappear and a reporter tries to get to the bottom of it all. Guests also enjoyed songs from the '30s and '40s by Joanie Sigal, the theatre’s producer and narrator.

"The Information Center has two roles,” said Amber Skjelset, the Manager of the Center. “It provides information about Scientology and it serves as a space for community meetings and artistic events such as the theatre performances. It was Mr. Hubbard, founder of Scientology, who said of artists, ‘A culture is only as great as its dreams, and its dreams are dreamed by artists.’”

L. Ron Hubbard was among the most prolific and popular writers through the Golden Age of Pulp Fiction. Between 1934 and 1940, some 140 L. Ron Hubbard tales appeared in legendary pulp magazines—with as many as three titles an issue and bylined under some fifteen pen names. With 19 New York Times bestsellers and more than 350 million copies of his works in circulation, Mr. Hubbard is among the most acclaimed and widely read authors of our time.

The L. Ron Hubbard East Coast Theatre is a volunteer group founded in 2011. Their shows combine actors, costumes and sound effects to bring the exciting pulp-fiction stories by L. Ron Hubbard to life.

The Scientology Information Center, located in the century-old Clearwater Building in downtown Clearwater, opened on July 11, 2015. It houses a gallery of audiovisual displays with some 400 videos. It provides a self-guided tour to the public of Scientology’s basic beliefs, world-wide Churches, social programs and the life of L. Ron Hubbard, Scientology's founder. The Center also holds concerts, theatrical performances, and receptions and makes its conference room available for meetings.