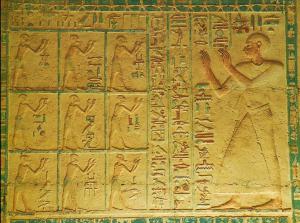 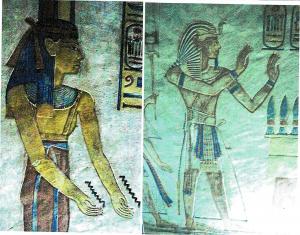 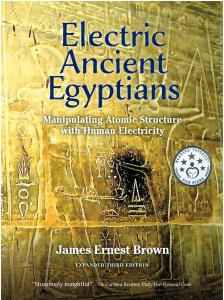 PAGOSA SPRINGS, COLORADO, USA, September 3, 2019 /EINPresswire.com/ — When traditional Egyptology began interpreting ancient Egyptian art and symbols, electricity had not been discovered. Therefore, with modern eyes we can interpret symbols in light of what is now known. Among the archeological legacies of past world cultures many images of hands and eyes were stenciled on cave walls, painted in tombs, or etched onto artifacts. The significance of human hands seems to be a universal and enduring theme. Examples include Ancestral Pueblo pictographs from Chaco Canyon, the “rattlesnake disk” from the Moundville site in Oklahoma, and Craig Mound at the Spiro site also in Oklahoma. A hand with an eye in the center of the palm is also a common symbol of protection throughout the Middle East. What author and researcher James Brown calls the “power position,” raised hands with palms out, appears frequently in Egyptian art and symbolism. Egyptologists say this hand position means “praise” or “adoration,” Brown disagrees.

Placing hands in the prayer position, as well as holding hands with another person, could be a way of building and transferring energy. There are 24 examples in the Bible of healing through laying on of hands. Reiki, which has its roots in ancient Japanese practices, uses palm healing, or hands-on healing, through which “universal energy” is said to be transferred through the palms of the practitioner to the patient in order to encourage emotional or physical healing.

Traditional Chinese Medicine views a person as a unified energy system of body and mind, each influencing and balancing the other. In Chinese Medicine, more than 2,500 years old, Acupuncture points are areas of designated electrical sensitivity along “meridians” of energetic current that have been shown to be effective in the treatment of specific health problems. In the Vedic system of India, and Buddhist traditions, hand positions called mudras, which means “seal,” are believed to link the brain to different parts of the body and are believed to facilitate the flow of subtle energy, triggering certain effects such as vitality and elevated mood.

The human body is an electrical system. Could the ancients be telling us that the hands are the most powerful and important tools on the human body to generate and distribute electrical energy? The triboelectric series is a list of materials that have a tendency to become positive (give up electrons) or negative (gain electrons). The list shows which combinations of materials create the most static electricity. Dry human hands are number one on the positive end of the scale, followed by cat fur, glass, silk, and human hair. Most importantly, rubbing two dry hands together generates the most static electricity. Cotton is neutral, which was the most common fabric for Egyptian clothing. On the negative end are gold, silver, sulfur, wood, and amber.

The image of ten human figures with raised hands is a relief is from the tomb of Petosiris from Tuna El-Gebel. The relief appears to be a chart of instructions, or formulas for procedures or rituals. The larger person on the right holds his hands in the “power position.” In this context, the idea of adoration seems illogical as the figures are facing each other. Brown believes the large person, who is facing the other figures, is demonstrating the different formulas that the hands could “power up.” The nine smaller figures in the boxes on the left side of the relief also hold their hands in the power position with palms facing out. The hand position is the same, but the writing is different in each box. There appear to be nine different procedures or formulas, using the static electricity generated by human hands. Each box has different symbols; each different symbol has a special meaning. The most important element is the electrical power supply generated by human hands.

There are many examples of these chart-like reliefs in Egyptian art. The items and glyphs in the smaller boxes need to be deciphered within the context and meaning of energy transmission. Brown believes that some conventional interpretations in Egyptology have been based on old information that needs to reevaluated. Some Egyptian images show people with two right hands or two left hands while at other times hands are depicted as right and left. It is obvious that artists knew how to draw two different hands. The Egyptians were a profoundly symbolic culture, so it seems logical that depicting two right or left hands in temple or tomb art had significance.

The image of the goddess from a tomb in the Valley of the Queens has two left hands and jagged lines are shown above her outstretched arms and hands. The conventional translation of this hieroglyphic symbol is “water.” Sometimes this symbol has a single jagged line, sometimes two or three. If the symbol means water, it seems strange that there is no vessel to contain the liquid or pour it from. The symbol is also elevated above her hands. However, since the most static electricity emanates from human hands, the symbol might better be interpreted as “energy.” Since the figure is a goddess, the symbol may indicate that she is offering a blessing of her unique energy. The ancient Egyptians frequently had multiple layers to their symbols. In contrast, the energy coming from the raised hands of the pharaoh, who has two right hands, could symbolize a different quality or type of energy.

Brown believes that the conventional interpretations of some ancient images are incorrect and need to be reexamined. This could provide a clearer picture of how this ancient civilization accomplished their incredible feats.