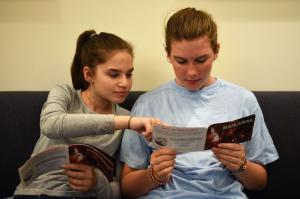 Two young Foundation for a Drug-Free World attendees read the “Truth About Marijuana” booklet that FDFW provided to inform the public on the effects of marijuana on the body and mind.

Marijuana edibles, which include candies, chocolate, cookies and chips very often have high THC content and are packaged to resemble sweets familiar to kids…”
— Joanna Young, a mother and founder of Drug Addiction Help Line

CLEARWATER, FLORIDA, US, September 5, 2019 /EINPresswire.com/ — With the push from marijuana advocates to legalize marijuana in Florida, FDFW is urging parents to find out the facts and the effects of this mind-altering drug and concerned mothers and volunteers of the Foundation for a Drug-Free World (FDFW) distributed hundreds of the “Truth About Marijuana” information booklets to other parents this past weekend in Clearwater.

“THC is the drug in marijuana that causes a high. A ‘God-given’ marijuana plant contains about 1-2% THC,” said Joanna Young, a mother and founder of Drug Addiction Help Line, who has helped educate hundreds of parents about drugs. “Marijuana is now being genetically modified by man to contain 12-25% THC and sometimes higher, this is far from God-given and has resulted in increased number of cases of psychosis in marijuana users.”

Another recent study found that people who smoked strong marijuana on a daily basis were three times more likely to be diagnosed with psychosis compared with people who never used the drug. Intoxication and heart problems were other common complaints in the Colorado hospital study.[ii]

“Marijuana edibles, which include candies, chocolate, cookies and chips (just to name a few) very often have high THC content and are packaged to resemble sweets familiar to kids, which is extremely dangerous and irresponsible. Children have been hospitalized from THC edibles.” Ms. Young said.

“The most common overdose incidents in children occur when the drug has been combined with food in an "edible" form of marijuana. This is because marijuana ingested in this manner can have a stronger and prolonged effect, especially in children under the age of 12 years old.

“In these instances, kids mistake ‘edible’ marijuana (like gummy bears, brownies, lollipops, etc.) for regular food and eat it unknowingly. Small children are at higher risk based on their size and weight. Because edible products have very high amounts of marijuana, the symptoms are more severe on a small child. Many young children who consume marijuana edibles require hospital admission due to the severity of their symptoms.”

The Foundation for a Drug-Free World urges the public to get the real facts and not blindly follow what the “drug pushers” who will benefit from the users, have to say.

The Foundation for a Drug-Free World provides free education materials to anyone. Their materials include 14 different information booklets on the most commonly abused drugs and a documentary DVD: “Real People Real Stories.” To get more information, copies of the booklets or the documentary DVD, visit www.drugfreeworld.org

Foundation for a Drug-Free World:

The Foundation for a Drug-Free World is a non-profit organization that educates youth and the community on the truth about illicit drugs so they can make the right decision live drug-free. The Church of Scientology is a sponsor of the program making it possible for the Foundation to provide educational materials at no cost to educators, law enforcement and the community. Humanitarian L. Ron Hubbard said, “Marijuana, for example, so favored by college students, who are supposed to be getting bright today so they can be the executives of tomorrow, is reported capable of causing brain atrophy.”