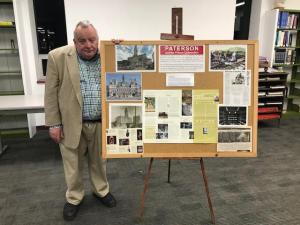 Daniel P Quinn in a program at Fair Lawn Library

Program for the Madison Arts Center will include backstage stories from Milan to Dublin, Rome,Backstage at LaScala to Off-Broadway in 2019.

MADISON, NEW JERSEY, 07104, September 29, 2019 /EINPresswire.com/ — Daniel P Quinn's special program for the Madison Arts Center will include NPR, Opera excerpts and tales in the Arts over 25 years from Milan to Dublin, Rome, and LaScala to Off-Broadway. Suggested contribution is $20.00. Students and Seniors half-price.

Daniel P Quinn's writing has appeared in The Italian Tribune; The Herald News; Audiophile Voice; Sensations; Theatre Journal; Italian Voice; Performing Arts Journal; Local Knowledge and The New York Times web.
“Daniel P. Quinn takes readers on a guided tour of his prolific career as an actor, director and producer through "a series of journalistic snapshots in a scrapbook of theatrical adventures." The Montclair Times.

This special program for the Madison Arts Center will include backstage stories from Milan to Dublin, Rome and NYC.
Congratulations daniel p quinn for completing: Newark, Italy + Me in 2019 (Lulu Books).

"Lively articles, letters and other documents MERGE into a personal narrative, Exits and Entrances constructs a detailed, behind-the-scenes look at the challenges and successes Quinn experienced as he managed to create 25 years of working off-Broadway and beyond" The Montclair Times

Quinn's career has spanned the productions of such notable shows as the U.S. premieres Edward Bond's plays Stone, Derek and other works by British playwright;Sacco & Vanzetti by Daniel Gabriel, Away Alone by Janet Noble, and Two and Twenty by Paul Parente, and revivals of The Women of Trachis by Sophocles, and works by Seneca, John Maguire (1877), the controversial Black Jesus Passion Play in 1997 and 1998, and composers such as Stephen Foster, Hanns Eisler, Louis Morreau Gottschalk, Kurt Weill and Hector Berlioz.

Quinn also received The Short Play Festival Award for his work as producer on Two and Twenty, The Irish Institute Award for Honesty Is the Best Policy and Diary of a Madman received a Best Actor OBIE as well. He is also the author of "organized labor" (Barnes&Noble.com) which achieved notable coverage on American Public Radio, The Coast Star, The Bergen Record, Irish Post, and The Italian Voice. "organized labor' has been called "poignant and alive," "wonderful," and refreshing."

Join us as a donor or patron on 10/17/19 in Madison, or later events in Newark, Paterson or Manhattan.
ArtsPRunlimited Inc is a sponsored program with Fractured Atlas
<http://www.fracturedatlas.org/site/fiscal/profile?id=11419&gt;

ArtsPR strives for excellence: https://conta.cc/2DDethA. Special thanks to Investors Bank for their renewed support for our Award winning programs.

The best compliment you can give me is forwarding this on to a friend.