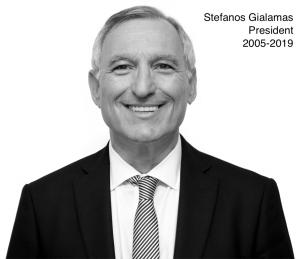 It is with deep sadness and great disbelief that we announce the loss of our beloved President, Stefanos Gialamas, age 64, who passed away in his sleep, October 18, 2019, prior to his keynote speech at the Alliance for International Education (AIE) Conference in Geneva, Switzerland.

President Gialamas had been at ACS Athens since 2005. Under his leadership, ACS Athens became a world-class premier international school guided by ethos and an institution in continuous pursuit of excellence.

A visionary of education and a lifelong learner, Stefanos Gialamas believed in serving humanity and was a mentor to many individuals that came across his path. He will always be remembered for his inspiring and exemplary leadership, for his love of children and of those in need, and for his innovative approach to education; but most importantly for his deep belief that education must result in the highest form of giving and demonstrating kindness to others.

The ACS Athens community joins his family in honoring the life and legacy of this exemplary leader.

The ACS Athens Board of Trustees assures that the vision of Stefanos Gialamas will continue intact.