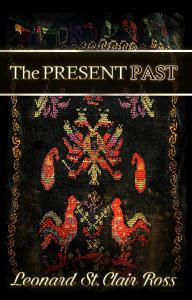 Deeply influenced by his experience in the military and secrets surrounding his Grandfather’s involvement in the Russian army, Ross drew inspiration from life.

This adventure is more a fanciful story related by a mischievous uncle than an airport thriller—and all the more entertaining for it.”
— Kirkus Reviews

Deeply influenced by his experience in the military and secrets surrounding his Grandfather’s involvement in the Russian army, Leonard Ross drew inspiration from life’s adventures.

At 18 he joined the Armed Forces serving in Japan, and later in Turkey as a top secret courier for the United States. From the Navy and Air Force to building his own sailboat and living aboard it in Key West, Leonard was a dreamer who remarkably brought his visions to life. This novel, though fiction, is an elaboration from his life history and the creative imagination of one spirited man.

“This adventure is more a fanciful story related by a mischievous uncle than an airport thriller—and all the more entertaining for it.”
Kirkus Reviews

It’s 1965 and US State Department Officer Josh Ross has been sent to Turkey to settle a dispute between Turkey and Greece. While there his old friend Gabe Smith hands him a letter sent from Russia that starts him on an adventure that takes him around the world. While being pursued by both the Russians and Bulgarians (and helped by Israel’s Mossad) can Josh uncover a family secret that goes all the way back to Czar Peter the Great?

The Present Past was Leonard's first and only novel, he passed away in 2009.

"Publishing this book was purely accidental." says publisher Jared Bendis. "Leonard was my favorite uncle, and after his passing my Aunt Louise mentioned that he had woven together our family history, his adventures in the military, and his love for James Bond into a novel that he didn't show anyone. After reading it, I insisted on publishing it."

ATBOSH Media Ltd. in Cleveland, Ohio is more than just Ross' publisher. As an Agency Press they also serve as the literary agent for both the book and its derivative works including the television and film rights.

"We are a different type of publishing house," says Jared. "Instead of shopping around this book to larger publishing houses, we published the book and will now be shopping it around to larger houses for them to take it to the next level."