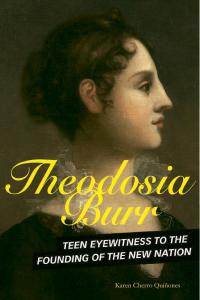 Theodosia Burr: Teen Eyewitness to the Founding of the New Nation

The book is scheduled to release on February 4, 2020 and is available for preorder on Amazon and Barnes & Noble.

LOS ANGELES, CA, UNITED STATES, January 22, 2020 /EINPresswire.com/ — Karen Quinones, esteemed author and tour guide, is starting off the new year with a bang with the release of her new book, “Theodosia Burr: Teen Eyewitness to the Founding of the New Nation”. The book is scheduled to release on February 4, 2020 and is available for pre-order on Amazon and Barnes & Noble. It is being published by Lerner Publishing Group.

“Theodosia is a fascinating person and grew up radically different from the girls around her. I think this is appealing to all teens today who are different. Her story is inspiring,” states Karen Quinones.

“Theodosia Burr: Teen Eyewitness to the Founding of the New Nation” is about the journey of Theodosia and how she impacted women’s education in America. Theodosia was the first young woman in New York City to be educated in the same manner as the young men. This biography uses her family’s personal correspondence and the recollections of those who knew her to recreate life in the 1780s and 1790s New York City and the story of an independent and highly educated young woman at a time when women were not fully educated and considered a lower class. And Theodosia Burr did “blow them all away.” It includes full-color illustrations and reproductions of correspondence.

“Her mother was also a well-educated woman, but not in a formal manner as was Theodosia. Her father, Aaron, was very radical in his ideas about women and loved to be around intellectual women,” Quinones continues. “He set out to prove that women were able to achieve the same intellectual status as men.” Theodosia was educated by the same tutors and teachers as Alexander Hamilton’s sons, the author Washington Irving and other NYC elite young men.

Quinones wrote the book as a way to celebrate the historically accurate incredible life of an extraordinary young woman in New York City during the 1780s and 1790s. The book is scheduled just in time to celebrate Women’s History Month (March 2020) with the inspiring story of Theodosia Burr, the daughter of Vice President Aaron Burr. Theodosia is known to fans of the musical “Hamilton” as the subject of the song “My Theodosia” a duet sung by Burr and Hamilton.

Quinones believes that a movement is currently in works. “As a result of the Hamilton musical, many American girls/women know a little about Theodosia,” claimes Quinones. “There’s a song in the musical about her: ‘My Theodosia’. I want her to become as popular as Alexander Hamilton and for everyone to want to read about her! And for me, I would like to be as well known as Ron Chernow (author of Hamilton biography that inspired the musical) for my expertise in Theodosia and her father.”

Karen’s book is already off to a great start in its pre-release as the few who have read it gave praising reviews. Most notably, Kirk Reviews is a highly regarded reviewing platform and it is very hard to get a good review from them. But Karen was able to with her book. “The writing is crisp, clear, and engaging. Full-color illustrations add visual appeal,” states Kirk Reviews. “This is an interesting and accessible way to learn about early U.S. history through a remarkable young woman's life.”

Sounds like “Theodosia Burr: Teen Eyewitness to the Founding of the New Nation” is a must-read and should be pre-ordered immediately.

Karen Q has spent fifteen years immersed in NYC’s early history. What began as a hobby, reading original documents, became a passion when she learned the stories of people long forgotten who did amazing things to create the city and nation we have today. In 2005 she began the Revolutionary Era walking tour to honor those great NYers. At the request of enthusiastic customers, she added the Alexander Hamilton and Aaron Burr Tour and The Revolutionary War Spies Tour.

Karen is the author of the forthcoming book “Theodosia Burr: Teen Witness to the Founding of the New Nation”, Lerner Books, Spring 2020. She has spoken at meetings of the NYC Chapter of the DAR (Daughters of the American Revolution) and is a regular speaker for the Queens Public Library. She is also a historical consultant for fiction authors as well as Fordham University Radio WFUV and AM New York (newspaper).

Karen has appeared on more than twenty episodes of The Travel Channel’s “Mysteries at the Museum” and was most recently seen on “America Unearthed”.