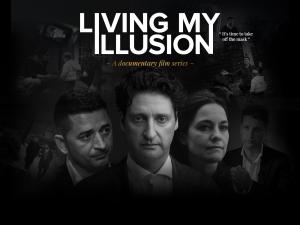 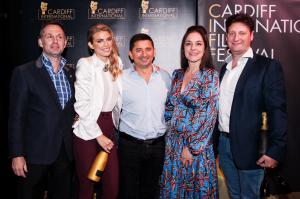 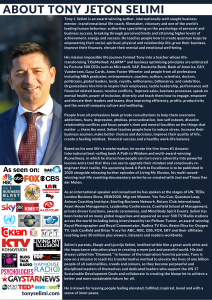 Allowing unconditional love to radiate from your heart is all you need to create the military commander that helps you win every battle of life.”
— Tony J. Selimi

LONDON, LONDON, CITY OF, UNITED KINGDOM, January 22, 2020 /EINPresswire.com/ — We are customed to live our lives according to what others think of us. With passing time, we become people pleasers and start to live our lives within the boundaries of other people’s expectations of you.

Episode One: The Truth Hurts

In a fast-paced Facebook/Instagram/Twitter world everyone thinks Joel has made it. But when he invites human behaviour expert Tony J. Selimi to be his Life Coach, a journey of self-discovery reveals shocking truths about his behavioural patterns, leading to a life-transforming decision that changes the course of his and his family’s life.

The protagonist, Joel amid midlife crisis, through Selimi's skilful life coaching techniques, he starts to get underneath the emotions to find the real problem so that he can overcome alcohol addictions, depression, diffuse relationship conflicts, address stress coming from being a business owner with ease and build the happiness and prosperity he so deeply craves.

The documentary shows people how to see the unseen in ways they didn’t know possible, amplify people's awareness and ultimately as they acknowledge their inner truth to help them take decisive action so they too can break free from addictions, fears, and the cocoon that is stopping them from living a fulfilled life. But the message of the documentary goes beyond Joel’s, and Timea’s story says Selimi. Violence, abuse, and control issues that are happening in every person’s relationship impact their children, family, their professional and business life and the wider community. By addressing it, many side effects can be prevented, thus living a more balanced, healthy and peaceful life says Selimi, the co-creator of Living My Illusion.

In his heart, he is confident that because of the message it carries, Living My Illusion documentary series will touch the hearts of Billions of people. Selimi has appeared on over 500 Radio and TV stations across the world including recent interviews by Ian Pelham-Turner, the award-winning Royal Correspondent, Jack Canfield and Brian Tracy. And for OXYGEN with Besim Dina, Afternoon on Top Channel Albania, Rudina Magjistari for RTV Klan, AlsatM, Koha TV, Klan Kosova, MTV Albania, London Albanian TV, on SKY, ABC, NBC, CBS and FOX reaching over 100 million viewers, listeners and readers worldwide.

The documentary is of tremendous value to people who find themselves in toxic relationships, maybe single and want to attract a co-loving relationship and for people who may have been separated and looking to find happiness in their next relationship. Selimi dedicated this documentary to all of the people globally who may be suffering in silence afraid to speak their inner truth, and are on a personal development journey to maximise their human awareness and potential. Our vision is to produce documentaries of Selimi's coaching clients transformation stories that raise awareness on issues such as mental health, identity crisis, midlife crisis, leadership challenges, intimacy, migration and refugees life challenges, etc., that move people into taking decisive action.

The upcoming episode of Living My Illusion documentary series “The Ghost of You” currently being edited, invites the viewer to not only look at the post-separation emotional rollercoaster that followed after what happened in episode one but also shows us the ups and the downs of transforming inexplicably when relationship adversity hits us. As the protagonists coaching journey continues, Selimi guide’s them both into finding cohesive ways to heal their wounds or divorce with love.

To arrange an interview, please contact Alma Stasel at info@tonyselimi.com.

Living My Illusion is available to watch on Amazon Prime from http://bit.ly/LMIAmazon.