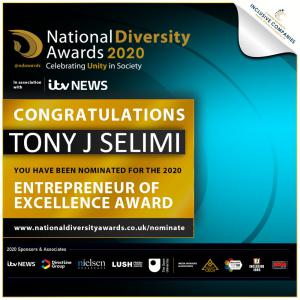 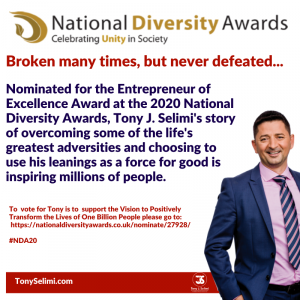 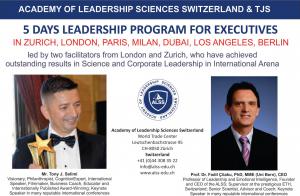 There are many migrants in the UK who represent all that is great about our diverse nation, and it’s about time individuals such as Tony J. Selimi be recognized

At times of hardship, it is your intent that orchestrates the solutions to your ever-evolving life challenges and helps you attain the fulfillment your heart is seeking.”
— Tony Jeton Selimi

LONDON, GREATER LONDON, UNITED KINGDOM, March 18, 2020 /EINPresswire.com/ — In many parts of the world today, many people direct their anger and failures towards migrants and the most vulnerable forgetting what they may have faced surviving. There are many migrants in the UK who represent all that is great about our diverse nation, and it's about time individuals such as Tony Jeton Selimi be recognized and nominated for an Entrepreneur of Excellence Award at the ITV Sponsored National Diversity Awards 2020.

Once a teenage victim of a civil war living homeless on the streets of London feeling alone, broken and with no one to turn for help, is now a globally famous and celebrated #1 bestselling author, multi-award-winning filmmaker and personal development thought leader inspiring millions of people.

For many of us where survival is thought to be next to impossible, all we have to do is to how Selimi, with his heart-wrenching life story, is living proof of how ordinary people who have suffered unsurmountable pain can achieve extraordinary results. Going from Homeless to receiving an award in Hollywood for Living My Illusion Documentary Series Episode One – The Truth Hurts, Tony Jeton Selimi spent nearly two decades working in business private and public sectors, managing large teams and leading multi-million-pound technology programs, before pursuing his calling to travel the world, teach, educate and transform the lives of one billion people.

Born in the remote town of Gostivar, Northern Macedonia, as a child, Tony was an ordinary boy who loved to dream about being a doctor, a scientist, an engineer, a writer and captain of a spaceship. He was born into a hard-working family whose main objective was to ensure he got the best education. Unbeknown to his family, at the age of five, he was sexually abused, causing emotional and mental troubling's, and due to illness at the age of ten, he almost died.

Throughout his primary and secondary education, he was bullied for being different and not conforming to the societal norms that promoted inequality. To free himself from the pain he felt deep inside, and he drove himself to study and become one of the best students in every school he attended. Tony received various achievement awards in science, physics and maths, and in 1998 he earned a place to study at one of the top engineering universities in Zagreb, Croatia. This happiness was short-lived, as in the summer of 1989, the Yugoslav civil war fell upon his country, and he was forced to join the army and fight his people. Miraculously his life was saved in 1990 when his mother put him on a one-way flight to London.

Adrift, after being faced with such trauma, he found himself homeless and alone, desperate and helpless with no one to turn to for help. He would stare in the mirror at the person trying to heal his excruciating pain, and educated himself to climb the corporate ladder, and fill the voids he felt inside.

This "pain," as Tony recalls, drove him to overcome a multitude of mental, emotional, physical, spiritual, relationship, social, career and financial barriers. Studying many life disciplines and the lives of the well-afforded, he successfully climbed the corporate ladder, which became his saviour.

In April 2014, A Path to Wisdom – How to Live a Balanced, Healthy and Peaceful Life was born. This book became an International Bestseller, winning multiple awards, and put him on a life trajectory that fulfilled his childhood dreams to travel the world educating and guiding others to achieve higher levels of self-mastery, achievement and fulfilment.

In 2016, Selimi published the multi-award-winning book #Loneliness – The Virus of The Modern Age and co-created Living My Illusion, a documentary series to share his and his client's triumphant life coaching breakthrough story's to raise awareness about the many issues people around the world are facing including homelessness, depression, addictions, divorce, epilepsy, OCD, ADHD, and many of the mental health issues frowned upon in the corporate world. Joachim Gerhard, a client of his, describes his integrated and holistic approach to self-mastery, leadership development and business growth, as 'the Jason Born of Personal Development Industry.'

Since its completion, Living My Illusion was released on Amazon Prime, has won many major Film and Documentary awards, and it plays a vital role in the dissemination of Tony's teachings and groundbreaking TJSeMethod: ALARM (TM) to contribute toward transforming education, healthcare, business, leadership and governments around the world.

For many of us, Selimi's journey through the most challenging of circumstances is also a reminder that the depiction of real-life events is in as much danger of indulging in caricature and ham-handed dialogue as anything from the realm of pure fiction. Three decades is what it took for Tony to go from living homeless to becoming a multi-award-winning filmmaker in Hollywood and being nominated for the ITV National Diversity Entrepreneur of Excellence Award.

He gives easy to digest answers and easy to implement practical solutions to life's challenges with his inspirational books, documentaries, talks, workshops, seminars, online courses and one to one coaching programs and Vital Planning for Elevated Living mastermind retreats.

To vote for him to win this year's National Diversity Entrepreneur of Excellence Award competition is to support the vision to transform the lives of One Billion People positively. Cast your vote now at https://nationaldiversityawards.co.uk/nominate/27928/ #NDA20

You can also e-mail us at info@tonyselimi.com to request to interview Selimi on your TV/Radio/Podcast show, invite him to inspire your audience, or hire him to work with you or on your business. For more information visit https://tonyselimi.com