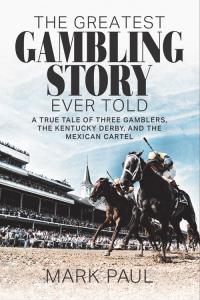 The release of a true adventure–The Greatest Gambling Story Ever Told—coincides with a new era of sports betting that will change the face of gambling.

The Greatest Gambling Story Ever Told is my true tale of three gamblers, the Kentucky Derby, and the Mexican Cartel”
— Mark Paul

LOS ANGELES, CA, UNITED STATES, March 20, 2020 /EINPresswire.com/ — The release of a rollicking, true adventure yarn–The Greatest Gambling Story Ever Told—coincides with a new era of sports betting that will change the face of gambling forever. Prompted by a May 2018 Supreme Court decision to overturn the ban on sports betting, 42 states have now embraced legalizing sports betting.

And now a new book, The Greatest Gambling Story Ever Told arrives with the inspiring story of a female racehorse, Winning Colors, who broke through the male-dominated world of horse racing to win the Kentucky Derby in 1988. It is also the story of three wild-and-crazy gamblers betting to win millions—unknowingly, with the Mexican Cartel–on Winning Colors’ 50-to-1 shot to win the Derby, and risked their lives in the process.

At least 56 million people in the U.S. play fantasy sports online, and more than $150 billion is annually wagered legally in the U.S. “That number is going to increase by 500% or more now that sports gambling will be legal in the majority of states in the next few years” predicts author Mark Paul. “Millions of people spend a large part of their free time reading and watching sports while gambling, poker is already huge, and I believe this is a large, budding market for books, audiobooks, and film. Sports betting is going to explode thanks to the Supreme Court ruling,” according to Paul.