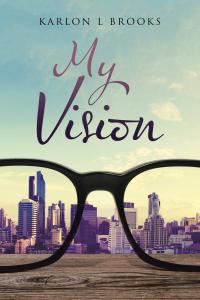 My Vision by Karlon L. Brooks

My vision is to show how we can come together as other races have done, not just in one community but across this nation.”
— Karlon L. Brooks

NEWARK, NEW JERSEY, USA, March 24, 2020 /EINPresswire.com/ — Author Karlon L. Brooks’ debut book “My Vision,” tells the story of how a young man, who was unsuccessful in starting his own business, succeeded in helping other businesses.

After a failed attempt in opening a business, Brooks and his friend Bill, a deli shop and catering hall proprietor, discussed the difficulties the Black business owners constantly face. Brooks wondered why Blacks don’t get support from other Blacks. Bill, being in the business for quite some time already, observed that Blacks don’t communicate with each other and that they are too often in competition with each other.

To strengthen the communication between Black entrepreneurs in their community, Brooks and Bill made a website and urged everyone to join and register their businesses. The success of the website grew larger than planned. An organization was formed out of this. They decided to do things on a larger scale and started to gain the cooperation of the community. Volunteers and donations started coming in. They got help from Black billionaire sports athletes and movie stars. The organization became popular and got into the political arena by helping members who are politicians. They started to take on the unbelievable task of building an entire neighborhood for low-income families. It was a huge success.

“I wanted to express a vision that I see. It is how we, as African-Americans, can come together as a race and make good on the sacrifices of our ancestors. My vision is to show how we can come together as other races have done, not just in one community but across this nation. We now have millionaire sports stars, lawyers and judges, doctors and surgeons, real estate moguls and banking financiers, engineers, and chemical workers. It shows we cannot only be equal, but we can also excel,” Brooks said when asked about pushed him to publish this book despite his health condition.

Author Karlon L. Brooks was born and raised in Newark, NJ. Married and divorced twice, he is finally together with the love of his life, Samira Benzaid, a high school mate. The natural father of Karlon Taylor Brooks and Marlin Brooks, he also raised four stepchildren. He’s a hard-working man who finally found his niche as a chemical operator for a chemical company.

Brooks was struck by cancer twice. On the second time, a cancerous tumor had to be removed from his spine and lost the use of his legs in the process. This is what gave him the time to write a book, but the inspiration came from the idea that black mega-millionaire sports stars, actors, and such can contribute to many projects needed in the black community compounded by the notion that blacks don’t work together. In this book, he aims to show his readers just how this can be done.