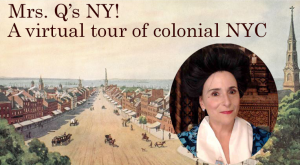 Karen posts about ways we can learn from the past. The irony of being banned for warning about totalitarianism and censorship is something she finds disturbing.

LOS ANGELES, CA, US, May 14, 2020 /EINPresswire.com/ — On May 1, 2020, historian, author, and owner of Patriot Tours NYC, Karen Quinones, was banned from posting on her personal Facebook account for “violating community standards”. The offending post illustrated totalitarian movements of the 20th Century with images from each: the KGB, the East German Stasi, and the German Waffen SS. The SS picture resulted in an immediate 24-hour ban and an accompanying 30-day ban on Live streaming video. Karen was also locked out of her Patriot Tours advertising account, making it impossible to promote her business on Facebook.

Since 2005, Karen has conducted tours of lower Manhattan and has appeared as a recurring cast member of Travel Channel’s Mysteries at the Museum. She knows every nook and cranny of the city's Island 's Southern tip. Nonetheless, these in-person tours have been put on hold for the time being because of the ongoing global pandemic. In April, Karen took matters into her own hands by taking her storytelling to her living room and giving viewers the ability to experience her acclaimed storytelling through Zoom and Facebook Live streams from the comfort of their own home. As a historical reenactor, Karen participates by giving free weekly history lessons as her 18th Century reenactment character, Mrs. Q. Since Karen relied on these channels to promote her company, she found it extremely difficult to expand her audience when Facebook made it impossible for her when they banned her from posting on her account, stating that she was “violating community standards”.

Here is an example of Karen giving a Virtual Tour of Colonial NYC: https://www.youtube.com/watch?v=WqsVJrMnuKE&feature=youtu.be

There is no doubt that people have sought refuge now more than ever in the practices of escapism. Whether it’s watching videos online, building one’s brand, or discovering new hobbies, these outlets have shown to offer a sense of comfort in these challenging times. Karen’s advertising privileges were finally restored after she protested directly to Facebook. As a historian, Karen states that she “often posts about ways we can learn from the past.” She goes on by asserting, “The irony of being banned for warning about totalitarianism and censorship is something I find disturbing”.

Join Mrs. Q on Facebook (PatriotToursNYC) or via Zoom Thursdays at 7 pm ET

Karen Q has spent fifteen years immersed in NYC’s early history. What began as a hobby, reading original documents, became a passion when she learned the stories of people long forgotten who did amazing things to create the city and nation we have today. In 2005 she began the Revolutionary Era walking tour to honor those great NYers. At the request of enthusiastic customers, she added the Alexander Hamilton and Aaron Burr Tour and The Revolutionary War Spies Tour.

Karen is the author of the book “Theodosia Burr: Teen Witness to the Founding of the New Nation”, Lerner Books. She has spoken at meetings of the NYC Chapter of the DAR (Daughters of the American Revolution) and is a regular speaker for the Queens Public Library. She is also a historical consultant for fiction authors as well as Fordham University Radio WFUV and AM New York (newspaper).

Karen has appeared on more than twenty episodes of The Travel Channel’s “Mysteries at the Museum” and was most recently seen on “America Unearthed”.