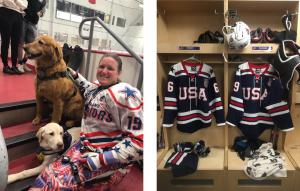 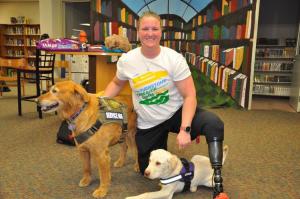 Christy Gardner with Moxie and Lucky

'LUCKY'…Little Guy, BIG MIssion' is the story of how Christy's own experiences have manifested with a adopting a special need puppy to be a therapy dog.

On this July 4th of 2020, Christy's story of patriotism, inspiration and hope is transcendent for Americans of every generation; and just what we need today and every day.”
— Brian Hoek

ROCKVILLE, MARYLAND, UNITED STATES, July 4, 2020 /EINPresswire.com/ — Inspiration comes in many forms. For author Eileen Doyon, it most recently came from seeing the story of Christy Gardner. Christy is a wounded veteran who has her trusted companion and service dog Moxie by her side. Having had both legs amputated due to injuries sustained during military service, Christy has relied on her own internal strength and fortitude to overcome life’s challenges. Part of her support system is playing sled hockey with the New England Warriors – and the ultra-supportive Moxie is never far away, even when she is on-the-ice.

Christy had contributed a piece to a book of Eileen’s back in 2014 and they stayed in touch ever since; including Eileen and her husband attending New England Warriors games. Another common connection to Christy is that Eileen’s husband is from the same hometown of Lewiston, Maine.

More recently, Christy adopted and trained a puppy by the name of ‘Lucky’ – who was starting out with a physical challenge – and it was there that Eileen’s first children’s book received its’ inspiration. Lucky is now a certified therapy dog at Leeds Central School in Maine.

“I was inspired to write ‘LUCKY…Little Guy, BIG Mission’ when I found out about Christy choosing to take Lucky home with her, giving him a chance at life. You see, when I met Christy, she inspired me by choosing to serve our great country; then after discharge, never, never giving up on anything in life that she wanted to do, regardless of circumstances.” says Eileen Doyon, “she said that Lucky was like her and she wanted to help him. I feel like we all need to learn from Christy about challenges we face in life in all areas. She is a true inspiration and champion! Lucky is proving to us all that being different is ok, and to never, never give up!”

Christy not only adopted ‘Lucky’ but has also trained him to become a therapy dog. For Eileen’s part, 50% of the profits from book sales are going to Christy to support her in the mission of training more puppies to live the enriching and rewarding life of being a service / therapy dog. The book is available for purchase on Amazon or direct from the Unforgettable Faces and Stories website: www.unforgettablefacesandstories.com/luckylittle-guy-big-mission

To learn more about and support the New England Warriors sled hockey organization, a non-profit chapter of USA Warriors out of Washington, DC and is a team of veteran heroes, learn more:
www.boostoxygen.com/the-new-england-warriors-are-veterans-and-heroes/

About the Author, Eileen Doyon:
Eileen has released eight books in her series ’Unforgettable Faces and Stories’. ‘LUCKY…Little Guy, BIG Mission’ is the ninth new release and her first children’s book. Eileen grew up in the small town of Fort Edward in upstate New York. She left there in 1978 and now lives in Portsmouth, New Hampshire with her husband, Dan and cat, Otis. Facebook: @UnforgettableFacesandStories and Twitter: @FacesandStories

CBS Sunday Morning ‘A Debt to a Service Dog’