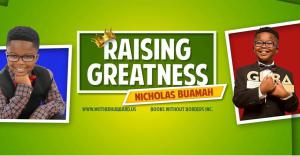 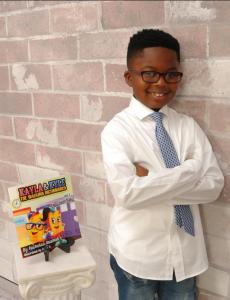 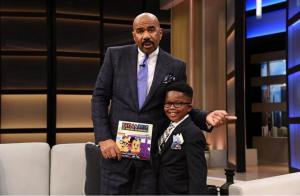 You're never too young to dream big!”
— Nicholas Buamah

ATLANTA, GEORGIA, USA, July 6, 2020 /EINPresswire.com/ — Who says you can’t be a kid and have your own talk show? No one does! That is why Atlanta native, nine year old bestselling author Nicholas Buamah can now add talk show host to the list of things that he has accomplished at his young age.

Raising Greatness with Nicholas Buamah debuted on July 1, 2020 on YouTube. With almost 11K subscribers on his channel, Nicholas will interview a plethora of guest to find out what led them down their path to success. His guest includes some of the most amazing people from various walks of life – Celebrity Chefs, Journalist, Hollywood Actors, Comedians, Producers, Professional Athletes, Entrepreneurs and more. Celebrity Chef/Television Host Jernard Wells is Nicholas's first guest!

At the age of seven, Nicholas wrote his first book, Kayla and Kyle: The Walking Dictionaries Vol. 1 Election Day. Not only is it an Amazon best seller, it has been cataloged in the Library of Congress. His second book, Kayla & Kyle: The Walking Dictionaries: A Puppy Surprise will be released later this summer. What is just as impressive is his MISSION: To help kids in underprivileged communities around the world have access to reading materials through his non-profit organization called, Books Without Borders, Inc.

Nicholas has been featured in several online news outlets such as BuzzFeed.com, Ebony Magazine, Black Enterprise, NewsOne, Face2FaceAfrica, and several more. He has also appeared on major television networks. His most notable appearance was when he was a guest on the Steve Harvey Show and helped the host learn a few new words. Steve Harvey was so impressed with the young author that he donated 555 books to send to Ghana (Africa) through Nicholas's nonprofit organization. He was also honored by the great Whoopi Goldberg on her show, The View.

Make sure to subscribe and tune into @RaisingGreatness every week on YouTube. You don’t want to miss this exciting and inspiring talk show!

To be a guest on Raising Greatness with Nicholas Buamah, contact information below.