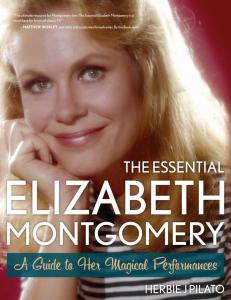 The cover of The Essential Elizabeth Montgomery: A Guide To Her Magical Performances by Herbie J Pilato (Taylor Trade/Rowman & Littlefield)

"The Essential Elizabeth Montgomery: A Guide To Her Magical Performances" is a "must-have" encyclopedia for "Bewitched" fans and pop-culture enthusiasts.

A loving, extensive, and incisive portrait of an actress who deserves the attention, and an important addition to any pop-culture collection.”
— Lou Aronica, New York Times best-selling author

The Essential Elizabeth Montgomery: A Guide To Her Magical Performances (Taylor Trade) by Herbie J Pilato (Twitch Upon A Star, Mary: The Mary Tyler Moore Story) is a delightful, beautifully composed and illustrated book (with both color and black-and-white glossy photos!).

The Essential Elizabeth Montgomery delineates, dissects, and celebrates the diversity of Montgomery’s bewitching career, while chronicling just how much her real life spilled into her historic roles on stage and screen.

The book is based on Pilato’s exclusive interviews with the actress and supplemented with commentary provided by, among others, legendary and Oscar-nominated actress Juanita Moore ("Imitation of Life," 1959), who co-starred with Elizabeth in a monumental episode of "77 Sunset Strip" about prejudice), and a myriad of entertainment professionals.

With plot summaries, air-dates, release dates, and behind-the-scenes notes and anecdotes of select performances, The Essential Elizabeth Montgomery is the ultimate handy, entertaining, and informative reference to her performances before, during and after "Bewitched" – including:

Her feature films like "The Court-Martial of Billy Mitchell" (1955, with Gary Cooper), "Who’s Been Sleeping In My Bed?" (1963, with Dean Martin and Carol Burnett), and "Johnny Cool" (1963, directed by future husband and "Bewitched" producer William Asher)

Says Pilato: "Elizabeth Montgomery remains one of the most beloved actresses of all time. She made her mark in on the screen with her iconic nose-twitch, and in real life, with her equally legendary generosity for numerous charitable causes. And what many don't know is that she made over 200 TV, movie, and stage appearances before Bewitched. I worked diligently to cover that part of her life and career, as well as the remarkable work she performed beyond and after "Bewitched." As a sequel to Twitch Upon a Star, which was my narrative biography of Elizabeth, The Essential Elizabeth Montgomery takes it one step further and details every major aspect of her life and career in encyclopedic fashion."

And the buzz for the book is steller:

"The ultimate resource for Montgomery fans, "The Essential Elizabeth Montgomery" is a must-have for lovers of classic TV."

"Exhaustively detailed and annotated with a plethora of film and TV appearances."

"Pilato always does his homework, and this is proof of it. This book has the magical ability to bring Montgomery's wonderful energy and charm back to the reader."

"A loving, extensive, and incisive portrait of an actress who deserves the attention, and an important addition to any pop-culture collection."

"This thoroughly researched book told me all about the young woman I fawned over back in the day…I came away from Herbie's effort with even more affection and respect for this green-eyed beauty."

"An enlightening history of an enchanted human being that will surely make any of her fans smile."

To order your copy, click on The Essential Elizabeth Montgomery.

To schedule an interview with Herbie J Pilato, visit www.HerbieJPilato.com