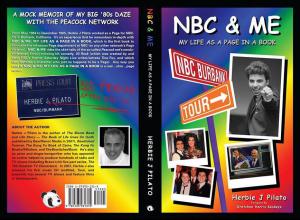 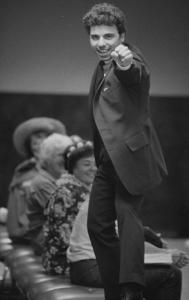 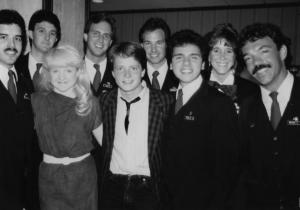 Herbie J Pilato’s “Family Ties” to NBC were strong, as evidenced by this image in which he is surrounded by actors Michael J. Fox and Tina Yothers, and a few fellow pages

Many Pages were excited by the frequent showbiz interactions that were accessible and provided by a major TV network facility. Some found work within and outside of the industry. Others found their job only uncovered a depressing, even insulting Hollywood experience.

Pilato is the acclaimed author of several other pop-culture/media tie-in books, including MARY: THE MARY TYLER MOORE STORY and TWITCH UPON A STAR: THE BEWITCHED LIFE AND CAREER OF ELIZABETH MONTGOMERY. He is also the host of THEN AGAIN WITH HERBIE J PILATO, a classic TV talk show now streaming on Amazon Prime and Amazon Prime UK.

In the "Big '80s," from May 1984 to December 1985, Pilato found himself on the set of now legendary TV shows such as "Family Ties," "The Golden Girls" and "Wheel of Fortune." He helped to coordinate an affiliates' convention, two press tours, five Bob Hope specials, "An All-Star Salute To President 'Dutch' Reagan," the 1984 Democratic Presidential Debates, the 1984 Emmy Awards, and "The Tonight Show starring Johnny Carson."

Pilato laughed with established comedians, lunched with network suits, hob-knobbed with celebrities, stuffed envelopes – and passed out tickets to "Scrabble" – all for a measly $5.20 an hour.

It's an experience that he remembers in-depth – and with tongue-in-cheek – in NBC & ME, in which he exposes for the first time the behind-the-scenes shenanigans of his initial TV network tenure. Within these pages (every possible pun intended), Pilato takes you – the reader – behind closed-doors, down inactive hallways, and inside TV's oldest web of intrigue (that's what they used to call television networks in the old days – webs).

NBC & ME offers the fast-track, inside-scoop, close-up-look, and behind-the-scenes peek at my wanna'-be life with the so-called Peacock network – and in the process, becomes the first book to chronicle infamous Page department of NBC (or any other network's Page division, for that matter).

In doing so, NBC & ME echoes the fun television past and, in the process, becomes a real…"page-turner"…in every sense of the term.

Herbie J Pilato discusses NBC & ME: MY LIFE AS A PAGE IN A BOOK