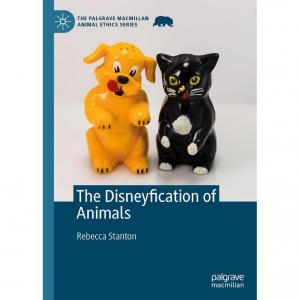 A new book shows how animal harm has been depicted, and sometimes romanticized, in Walt Disney Animation Studios’ films.

Filmmakers have a responsibility to see that they don’t perpetuate cruelty to animals.”
— The Revd Professor Andrew Linzey, Director of the OCAE

The Disneyfication of Animals written by Dr Rebecca Rose Stanton is being published by Palgrave Macmillan, as part of their innovative Animal Ethics series.

Each chapter explores a different form of animal harm, from farming, hunting and fishing, to clothing, work, and entertainment.

The book also questions why animal farms in Disney films, such as The Fox and The Hound and Home on the Range, are almost-always free-range, comfortable, and spacious places for animals to live in, even though this contrasts greatly with animal farming in reality.

Dr Rebecca Rose Stanton, an Associate Fellow of the Oxford Centre for Animal Ethics (OCAE), said: “Many people’s first, and sometimes only, experiences with certain species of animals originate from fictional depictions in cultural representations, such as those in Disney films.”

“This is worthy of study because there is strong evidence that fictional cultural representations can affect how people view and treat specific species of animals in reality.”

She continued: “With the rising interest in animal welfare, I hope that there will be much more research into the effect that cultural representations can have upon viewers, and how this can influence animals in reality.”

Director of the OCAE the Revd Professor Andrew Linzey commented “This is just the book we need to understand how positive, and especially negative, cultural attitudes to animals are created and perpetuated by the screen media in particular. Filmmakers have a responsibility to see that they don’t perpetuate cruelty to animals.”

• "The Disneyfication of Animals" can be ordered from Palgrave Macmillan.

• The book is published as part of the Palgrave Macmillan Animal Ethics book series in which more thirty volumes have already been published.

• The Oxford Centre for Animal Ethics is an independent centre pioneering ethical perspectives on animals through academic research, teaching, and
publication. It comprises more than one hundred academic fellows drawn from the sciences and the humanities. Professor Andrew Linzey is co-editor of "Other Nations: Animals in Modern Literature" published by Baylor University Press.