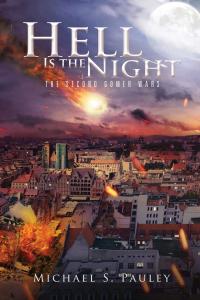 Hell Is the Night: The Second Gomer Wars

SOUTH CAROLINA, UNITED STATES, December 30, 2020 /EINPresswire.com/ — Michael Pauley continues his riveting sci-fi saga and in the pages of "Hell Is the Night – The Second Gomer Wars” readers will see what the titular alien invaders' new schemes are for Earth. This is his sequel to "They Own the Night: The First Gomer Wars," which portrayed the aliens' initial attack and invasion. The remaining defenders of Earth who survived that onslaught will find out that it is not over yet – far from it.

General Patrick, one of the leaders of the resistance, learns that the extraterrestrial forces have returned and that the stakes are even higher. Their machinations seem different and far more sinister. There is confusion as to whether these new Gomers intend to make peace or continue their conquest. And there is distrust, as humanity must discern whether the aliens have learned from past mistakes or present a new threat. Either way, they seem more dangerous – smarter, more ruthless – than the forces mankind faced before.

As in the first conflict, General Patrick and President Blanchard must rally the forces of Earth, remake allegiances, and amass resources to face the threat. This is no mere coalition of the willing but mankind massing on a scale never seen before, not even in the previous conflict. After all, this is not about any dispute between earthly powers, but a struggle for the survival of all humanity. As the Gomers come from space, the people of Earth must show that they will not go quietly into the night without a fight. That is humanity's foremost goal, to survive and live on. To preserve their independence and freedom even as the day of reckoning approaches.

"What began as a mental exercise to answer the question of "What if there really was an alien invasion?" became an obsession to find the answer. As a student of Military history and Geopolitics, the answers are found within the pages of my books." Pauley says. A military man who served during the Cold War back in the heyday of the Star Wars defense program, he weaves a rich and riveting narrative that is enhanced by his tactical and strategic knowhow.

He takes the premise, the quintessential alien invasion, and infuses it with technological and militaristic verisimilitude – War of the Worlds by way of Tom Clancy. So with "Hell Is the Night – The Second Gomer Wars," Pauley gives aficionados of the genre, from readers of Heinlein to Jane’s Defense Weekly alike, much to enjoy.

About the Author
A self-described Cold War relic, Michael S. Pauley is an attorney and soldier who has had 40 years of military affiliation, having served in all three components of the United States Army.