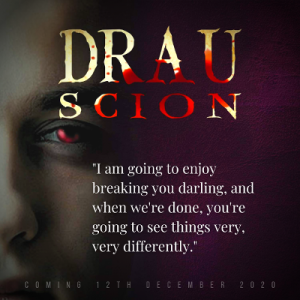 The trailer entertains and masterfully draws viewers in with its cinematography and music. It’s intense and leaves the viewer unsettled and uneasy. ”
— – Fran Briggs, Publicist to E S Stephens.

Using inflections from his voice against a spine-tingling and riveting, musical score, Walter "Waltius" Read delivers the ambiance of a well-written, ominous and petrifying narrative.

"For too long you have been a thorn in my side. We both know you don't know leave a job unfinished," he states in a distinguished British accent.

Drau: Scion centers on the dramatic events of the King's demise. The noble House of Dhal-Marrah has returned to prominence where many question the sudden favor granted to The House of Assassins.

"Drau: Scion's trailer entertains and masterfully draws viewers in with its cinematography and music," stated Fran Briggs, Publicist to E S Stephens. "It’s intense and engrossing and leaves the viewer unsettled and uneasy.”

For more information about the author and Drau: Scion, including how to purchase, visit https://www.esstephensauthor.co.uk/drauscion or call 07749932634 (U.K.).

Elizabeth S Stephens lives in the riverside town of Kings Lynn on the Norfolk coast of the United Kingdom. When the fantasy horror writer is not tending to her young son, she's sitting at the breakfast table writing dark tales and chilling fantasy novels or traveling across the country to meet and greet with readers and talk about writing in high schools, colleges, and libraries. Author of the globally sold Drau Series, she was listed at #1 for The Best of Spring Reading by EIN Press, and at #8 in "20 Must Reads for Fall 2020." Elizabeth has also been cited by NBC and WRAL 5 (USA television). Her flagship series is a wild ride of murder, assassination and epic fantasy. Elizabeth currently resides in the United Kingdom with her 6-year-old son.