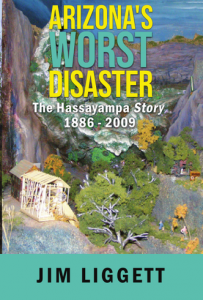 The Story of the Walnut Grove Dam Disaster of 1890 Involves Early Arizona Territory History and the Hook in the Story is the Search for the Lost Safe.

CHEYENNE, WYOMING, USA, January 27, 2021 /EINPresswire.com/ — Greg Hawk, Author and Treasure Hunter, has been negotiating with the owners of a ranch close to Prescott, Arizona in hopes of producing a documentary on their property. The story involves the history of the developing Arizona Territory and the rush for gold. The treasure story that is intertwined in the Walnut Grove Dam Disaster is that of Bob Brow’s Saloon that disappeared along with barrels of whiskey and a safe reportedly containing between $5,000 and $10,000 worth of valuables. The safe is believed to still be buried somewhere in the sands of the Hassayampa river.

The Walnut Grove Dam failure is documented in the book, Arizona’s Worst Disaster: The Hassayampa Story 1886 – 2009, by Jim Liggett. Desert Roamer Press has recently gained the rights to republish the book from the author. If interested you may find it at www.desertroamerpress.com

Working with his good friend, Prof. Jim Fink, a geophysicist and geological engineer based in Tucson, they started gathering all relevant information they could find on the Walnut Grove Dam Disaster of 1890. Reading numerous magazine articles on the dam failure, studying the weekly newspaper articles during that period, and scanning through Arizona history books provided a vast amount of research material.

The biggest question is where was Bob Brow’s Saloon located when the Walnut Grove Dam failed? Some treasure hunters believed the saloon had to be downstream close to the work crews building a lower dam. Another thought was that it was located closer to Wickenburg that was becoming a small town at that time. The actual story of the dam failure tells of bodies being found 30 miles downstream from where they were and of large boulders being tossed like tennis balls. The 110-foot-high dam held back nine billion gallons of water and when it failed a wave of water that was 80 feet to 100 feet high started its way down the canyon. By the time the wave hit Wickenburg and flattened out it was still 20 feet high.

Over the last several months Greg and Jim have made several journeys out to the site of the old Walnut Grove Dam site. The owners of the ranch where the dam was erected showed them the ruins of the dam. They provided pictures of the dam and reservoir prior to its failure and talked about the history of the area. They are fourth generation ranchers and their family have owned the land since 1909. The information they provided may reveal the actual location where Bob Brow’s Saloon stood.

For further information on Greg Hawk’s adventures go to www.desertroamerpress.com and check out the treasure blog, treasure hunting videos and his book, Random Tangents: Embracing Adventures in Life.