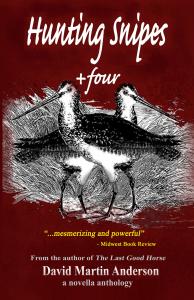 BOERNE, TEXAS, USA, January 27, 2021 /EINPresswire.com/ — Conroca Publishing’s Editor-in-Chief, Kevin Abreau, announces a January 2021 release date of David Martin Anderson’s collection of stories titled "Hunting Snipes+four" (76,000 words; general fiction). Anderson’s collection of prose consists of five stories, novellas to short story novelettes, all thoroughly enjoyable and quite remarkably told. Suitable for ages 16+, Conroca Publishing strongly feels the collection could make into a required literary tome for high school age children as a YA read, but the plots also make into an entertaining read for adults. Anderson wrote the diverse collection to transport a reader’s imagination to worlds non découvert—an Indian raid in West Texas in 1867, encounters with the ghost of Cole Porter, Iowa during the 2020 pandemic, southern Utah and a serial killer hunting elderly couples, and Beggar’s Night in 1938 Brooklyn and the infamous Orson Welles radio broadcast of ‘The War of the Worlds.’ Each story lends itself to screenplay as they are concise and visual with crisp and realistic dialogue. Book distribution is through Ingram and Conroca Publishing. Books are also available through Amazon both in trade paperback and as a E-reader. Anderson’s career as a writer spans over twenty years. His The Last Good Horse is considered one of the twenty greatest horse stories ever written (ref., Amazon) and was a finalist for the coveted Faulkner-Wisdom literary award, as was its sequel Beaty Butte. Other major works include The Cowboys of Haddington Moor, Harry’s Apology, and Les Tres Papillons. Hunting Snipes+four is Mr. Anderson’s first stab and shorter storytelling, and he does a masterful job.

Of special literary quality is Anderson’s "Runner Speaks," an action-packed novella (12,000 words) set at Fort Lancaster, Texas in 1867. While loosely based on the only hostile attack on a Texas fort, the plot, itself, is historically accurate. The protagonist is an eleven-year-old German immigrant, the lone survivor of the Nueces River massacre of 1862 (a slaughter initiated by ruthless Confederate soldiers). Seeking help, the boy wanders to the Union-controlled Fort Lancaster one hundred miles away only to find the fort abandoned; the remote fort sits on the banks of the Pecos River in a desolate corner of Texas. For five years, the boy lives off the land along the river, alone; running becomes his catharsis to ease traumatic memories of murders he witnessed along the Nueces. Coincidentally, the boy has lost his ability to speak because of mental anguish suffered during that killing spree. In the summer of 1867, U.S. Cavalry ‘Buffalo Soldiers’ reoccupy the fort but the boy refuses to intermingle with any adult wearing a uniform. Now, at age sixteen, a ‘hostile’ raid besets his tranquil Pecos valley. Kickapoo warriors have successfully stolen the fort’s horses but their Comanchero brothers want to continue fighting until female hostages are taken. This means a massacre will undoubtedly take place because Lancaster soldiers refuse to surrender. Badly outnumbered 800 to 40 and with no horses available for a messenger to ride to Fort Stockton to summon reinforcements, the boy is sequestered into carrying a letter on foot the eighty-mile distance. If he reaches Fort Stockton in less than two days, the survivors at Fort Lancaster stand a chance to survive; if he fails, death will surely follow. The Comancheros discover the boy’s flight and pursue him in a twisted hunters’ game of ‘cat-and-mouse.’ En route, the boy’s letter is lost. Thus, if the boy somehow survives his mission to Fort Stockton, he must find the strength to overcome past ghosts and verbally communicate the situation to the fort commander. The current-tense writing style of this story propels a reader into the midst of the plot with every twist and turn felt along the way. It is a remarkable piece of prose!
Other stories in the collection are more contemporary but just as creative. All are available at Amazon and distributed through Ingram!
ISBN 978-1-892617-34-7 (Paperback); ISBN 978-1-892617-35-4 (Digital/eBook)