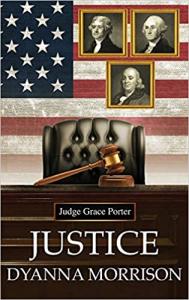 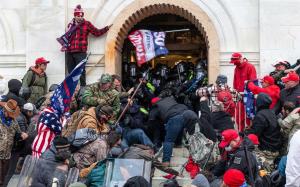 January 6, 2021 – A pro-Trump insurrectionist mob breaks into the Capitol building. 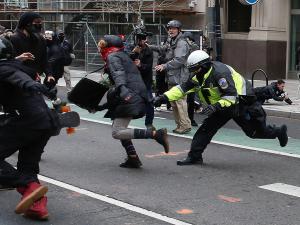 Author Dyanna Morrison has released JUSTICE, book one of The Justice Trilogy based on years of in-depth research of the US Constitution and the Bill of Rights.

History and politics collide in the whip-smart premise of Justice.”
— Independent Book Review

PROVIDENCE, RI, UNITED STATES, March 1, 2021 /EINPresswire.com/ — When Dyanna Morrison decided to make her play into a book last spring/summer, there was clearly no way she could have anticipated the horror and escalation of events that would unfold on January 6th, 2021, threatening our democracy to the very core! Coincidentally, the first trial highlighted in JUSTICE, details the eventual acquittal of all but 10% of the over 200 peaceful protesters arrested on the inauguration day of Donald Trump, and serves to provide a stark contrast to the lesser arrests and charges, to date, filed against the January 6th, 2021 insurrectionists at the Capitol. The second trial is loosely based on the tragedies surrounding the Charlottesville, “Unite the Right” rally. The message of Justice is now more timely than ever and is a scathing rebuke of white supremacy, fascism, and every other hate-filled group representing white nationalism!

The author has a message to share with the people of our country regarding what is at the foundation of our democracy and the magnitude of the effort that was required, allowing us to remain the oldest enduring republic in world history. Our framers have been under renewed scrutiny recently as a result of the Black Lives Matter movement, which is understandable. Accordingly, she includes their viewpoints on slavery at the time of the push for ratification of our Constitution/Bill of Rights and their efforts to include a phasing out of the slave trade in JUSTICE.

In this current time of political upheaval, Ms. Morrison believes that the message of JUSTICE will resonate with readers and that it will be viewed as a thought-provoking and sometimes humorous portrayal of our founders, through the lens of our current legal system, offering a unique and timely reminder of what it means to be an American. JUSTICE conveys a palpable sense of hope, that one strong and righteous mind can make the difference in changing our course of events, versus perpetuating the status quo.

From the author, Dyanna Morrison:
The premise for the Justice Trilogy came to me with a little help from a dear family friend back in the late 90s and struck a chord with me that I ultimately chose to turn into a reality. What would the guys who wrote the stuff think if they could witness contemporary legal proceedings and would they agree, and does it matter? I say it does and it is through a thought-provoking lens, requiring us to really think about the prevailing factors that shaped our democracy. I started researching our founding fathers, the Constitution, and the Bill of Rights in 2001 and have remained fascinated by the premise ever since.