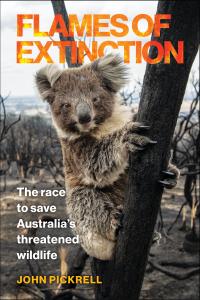 WASHINGTON, DC, UNITED STATES, April 15, 2021 /EINPresswire.com/ — In the early months of 2020, Australia’s iconic wildlife fought for survival in the face of unprecedented wildfires. Images of koalas drinking from firefighters’ water bottles became the global face of a catastrophe that would kill or displace as many as three billion animals. Known as the Black Summer, the fire season was one of the worst ecological disasters in modern history.

"Flames of Extinction: The Race to Save Australia’s Threatened Wildlife" (Publication Date: April 15, 2021) is the first book to tell the stories of Australia’s record-setting fires. In gripping detail, award-winning journalist John Pickrell puts readers on the ground with the plants and wildlife that are forever changed—and the people who stepped up to protect them.

Amidst a grim picture of suffocated birds and flames so hot not even animal skeletons remained, Pickrell’s reporting reveals a larger story of hope. In "Flames of Extinction," he tells the inspiring stories of over 80 conservationists, wildlife rescuers, and Indigenous rangers who worked tirelessly to shore up remaining habitat and feed and rescue surviving wildlife and plants, as well as the ecologists, botanists, and others who studied fire responses and adaptations to help bring species back from the edge of extinction.

Readers will meet ecologist Romane Cristescu and Bear, a koala detection dog who helped find over 100 koalas in areas impacted by fires. In the primordial Gondwana Rainforests, Pickrell visits the critically endangered Nightcap oak, a dinosaur-era tree threatened with destruction by the bushfires. On Kangaroo Island, Pickrell meets with conservation workers racing to discover how badly the bushfires impacted the glossy black-cockatoo, an endangered bird already saved from extinction once. But despite the bushfires, many of these species have a brighter future due to Australians’ heroic efforts.

As climate change intensifies and devastating wildfires become commonplace, Australia’s Black Summer offers an urgent warning to the rest of the world. Through inspiring storytelling, Flames of Extinction shows how we can act to protect species even in the face of disaster.

John Pickrell is an award-winning journalist, the author of "Flying Dinosaurs" and "Weird Dinosaurs," and the former editor of "Australian Geographic" magazine. Currently the Asia-Pacific Bureau Chief for "Nature," he has worked in London, Washington, DC, and Sydney for publications including "New Scientist," "Science," "Science News" and "Cosmos." His articles also appear in "National Geographic," "Scientific American," "Focus," "BBC Future," "The Guardian" and the ABC. John has been a finalist in the Australian Museum’s Eureka Prizes three times, won an Earth Journalism Award and has featured repeatedly in "The Best Australian Science Writing" anthology, which he edited in 2018. He studied biology at Imperial College in the United Kingdom and has a Master of Science in taxonomy and biodiversity from the Natural History Museum, London.

Founded in 1984, Island Press works to stimulate, shape, and communicate the information that is essential for solving environmental problems. Today, with more than 1,000 titles in print and some 30 new releases each year, it is the nation’s leading publisher of books on environmental issues. Island Press is driving change by moving ideas from the printed page to public discourse and practice. Island Press’s emphasis is, and will continue to be, on transforming objective information into understanding and action. For more information and further updates be sure to visit www.islandpress.org.
###