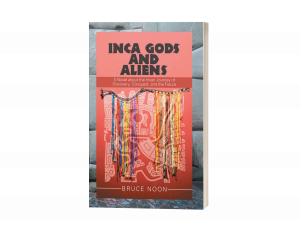 Inca Gods and Aliens: A Novel about the Incan Journey of Discovery, Conquest, and the Future

A fantastic glimpse of Inca history, lore, and gods

COOKSTOWN, NEW JERSEY, USA, May 17, 2021 /EINPresswire.com/ — If you were given the keys to the universe, would you want to use them to open the doors?

This book takes us on a fantastical historical adventure through time, linking stories based on Inca legends, the creation of the Inca empire, collaboration with the gods, and discoveries by a young man of Inca ancestry that leads him to our future. The book "Inca Gods and Aliens" by Bruce Irvine Noon tells a story about the Andean Mountains and winged chasqui who carried messages on the ancient trails thousands of miles long. There are stories within the quipu's colored strings and knots, potions that can heal or possess your soul, and ways to communicate with the gods.

Bruce is a graduate of the University of Arizona and a retired Software Analyst and ASCP Medical Technologist. He served four years in the U.S. Army, where he was assigned to the Blood Transfusion Medical Research Laboratory and was NCOIC in the Immunology Laboratory there. Bruce traveled in many hospitals in the U.S. and Europe as a consultant, trainer, and installer of computer systems in the medical laboratory.

A native of Nogales, Arizona, on the U.S. and Mexican border, before graduating from high school, Bruce played clarinet in the high school band, lettered three years in football, was president of his church youth group, and helped set up a non-denominal youth outreach program. After serving in the military, he graduated from the University of Arizona and worked as an ASCP Medical Technologist and software analyst. After retiring, Bruce, with his wife, Irene, runs a bed and breakfast in Baja California, Mexico named Casa Mediodia. He wrote "Inca Gods and Aliens" as a jogger inspired by the Inca Chasqui, the Andean messengers who ran the Inca trails.

The discovery of a child mummy by archaeologists who labeled her death as a sacrifice led our characters on a quest to discover if the stories they interpreted were true. This led to numerous archaeological clues and documents written by priests who traveled with Francisco Pizzaro and his conquistadors. Their investigation eventually leads Jesus and his friends to the Archive of the Americas in Seville, Spain, The Vatican, and back to his own homeland, where, with his new superpowers, he protects his family and friends.

This book is perfect for fans of ancient history, myth, and legends and definitely deserves a spot on your bookshelf. Get your copy today!